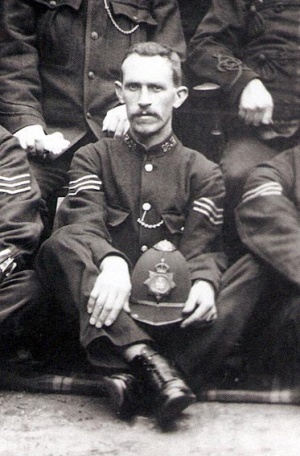 Witness at the Pinchin Street Murder inquest and discoverer of the torso.

PC Pennett gave his account of the discovery of the torso at the inquest on 11th September 1889:

I went on duty at 10 o'clock on Monday night. Nothing attracted my attention that was unusual. I was on a regular beat during the night and morning. I had to go through Pinchin-street about every half-hour. I entered it from Christian-street and Backchurch-lane. I occasionally turned down Frederick-street to where the stables were. I then returned to Pinchin-street. Once or twice I cut it short, and simply went into Backchurch-lane. About 25 minutes past 5, I came from the direction of Christian-street to Pinchin-street. I went across the road from the northern side, in the direction of the railway arch, and had no particular reason for so doing. As I was crossing I saw, in the arch, something that appeared to be a bundle. The arch, which was filled with stones belonging to the Whitechapel District Board of Works, led on to a piece of waste ground, on which were three arches abutting onto Pinchin-street. Two of these arches were closed in with fencing to some considerable height. In front of the arch that I first referred to there remained only the uprights of some fencing, which had been taken away. The archway had a large quantity of paving stones in it, and these were piled up. There was also a carriage entrance to the arch from Backchurch-lane. The bundle was, I should say, from four to five yards in the archway, measuring from the pavement. The bundle was near the wall of the arch, on the western side. On going up to it I found that it was a portion of a human body. It was covered by two or three pieces of rag, but what these were I could not say at the time. With the exception of these it was naked. I noticed that the head had been taken from the body, and that the legs were missing. The trunk was lying on the stomach, with the shoulders towards the west. It was very dusty inside the arch, but I did not notice any marks of wheels or footprints. I do not think the impression of footprints would show. There were no clots of blood about. I did not blow my whistle, as I thought it might cause a crowd to assemble. Knowing it was a lifeless body I waited a minute or two. A man came along with a broom on his shoulder. I said to him, "You might go and fetch my mate at the corner." He replied, "What's on, governor?" I answered, "Tell him I have got a job on. Make haste." The man then went up Backchurch-lane towards the adjoining beat. I next saw two constables running towards me. Constable 205 H was acting sergeant at the time, and he was the first to get up to me, and Constable 115 H was behind him. I said to 205 H, "You had better go and see the inspector, as there is a dead body here." He ran away in the direction of the station, and 115 H remained with me. It was not very long before I saw Inspector Pinhorn, who at once gave directions for the arches to be searched.

He was then cross-examined by the coroner, Wynne Baxter and others:

THE CORONER. - Had you seen any one pass at that time? No; I made a search and found two men; apparently sailors, asleep in the last arch. They were a short distance apart from one another. They were in the farthest of the three arches from Backchurch-lane. In the middle arch there was a shoeblack lying on the stones. He was also asleep, and I woke him up. Only one of the sailors was asleep. I am not certain whether the other one was asleep or not, as he had a pipe in his mouth. The three were taken to the station.

[Coroner]Did they make any statement? - They made none to me.

[Coroner]Can you fix the time when you passed this place before? Before 5, Sir. I am sure of that, as I called a working man just before 5. At that time I was on the northern side of Pinchin-street. I looked into the arch on that occasion, and at the time day was breaking. Had the body been there then I should have seen it.

[Coroner]After you left Pinchin-street on that occasion, in which direction did you go? Up Backchurch-lane and into Ellen-place. From there I got round to Christian-street.

[Coroner]Did you see any one with a bundle? - No, Sir. I did not see a costermonger's cart about. I saw a barrow in Spildts-street. It had a board on it, and had been there the whole time I was on duty. I saw no other cart or vehicle about, with the exception of those coming out of Christian-street, which belonged to Messrs. Fairclough. These started soon after 4 o'clock in the morning. I did not see any of these come down Pinchin-street. These vans went in all directions, and I can't say if any of them went into Cable-street.

[Coroner]What time did the doctor arrive? - Dr. Clark, assistant divisional surgeon, arrived within half-an-hour after I found the body. It was after 6 o'clock when the body was removed to the mortuary.

[Coroner]Is this arch often used for sleeping purposes? - I cannot say. It was the first time I have been on the beat. There was a change of duty.

By the jury. - I should think the body had been carried to the arch in a sack or something of that description, and then taken out and placed where it was found. Had it been dragged along I should have seen marks of a trail in the dust.

The Foreman. - Did the ground appear to have been disturbed? - No. Had the body been "shot" out the neck would have been covered with dust. There was no appearance of any dirt on the blood [sic].

By Inspector Reid. - There were a lot of stones as well as dust in the arch, and had there been a struggle there I might not have seen any signs of its having taken place.

[Coroner]Had you seen a man carrying a bundle, would you have stopped him? - Certainly, and any other constable would have done the same. We stop all suspicious persons. I only called up one person that morning, and he asked me to call him between 10 and 11 on the previous night. He asked me to call him all the week at the same time. That is a very common occurrence on some beats. [3]

The men found under the nearby arches were Michael Keating (a shoeblack) and Richard Hawke (a sailor). They were taken into custody.

PC Pennett was later promoted to Sergeant and retired in 1913.