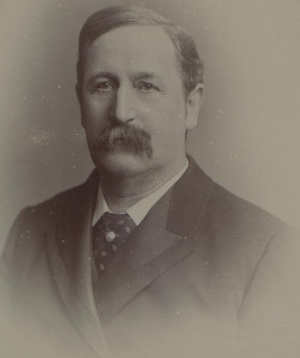 Photograph of Donald Sutherland Swanson (courtesy of the Swanson family).

He was described by Sir Melville Macnaghten as "a very capable officer with a synthetical turn of mind" [1] and by a contemporary, John Sweeney, as "One of the best class of officers". [2] In his memoirs, another contemporary, Patrick McIntyre, named five outstanding detectives, of whom Swanson was one.[3]

In the absence of the newly appointed Assistant Commissioner CID, Dr Robert Anderson, the Commissioner, Sir Charles Warren, wrote to the Acting Assistant Commissioner CID, Alexander Carmichael Bruce, on 15 September 1888, to notify him that he was putting Swanson in charge of the case. Swanson was to act as the "eyes and ears of the Commissioner" for the time being, and to have no other responsibilities to concern himself with. He was to have a room to himself, and every paper, document, report and telegram connected with the case was to pass through his hands. He was to be consulted on every subject, and to be given the whole responsibility, though unless there was some extreme urgency he was to consult either Warren, Bruce or the Chief Constable of the CID, Adolphus Williamson, about important particulars. [4]

The following year, when giving evidence before a Department Committee, he described his working day between September and December 1888: "I had to be at the office at half-past 8 in the morning; then I had to read through all the papers that had come in, which took me till 11 pm., and sometimes 1 and 2 in the morning; then I had to go to Whitechapel and see the officers — generally getting home between 2 and 3 am."[5]

He was the author of a series of detailed reports on the investigations of the murders of 1888:

A tabular comparison of the descriptions of men seen near the scenes of the murders of Chapman, Stride and Eddowes also survives in his personal file. [11]

In late December 1888, Swanson was deputed to assist the local police inquiry into the death of Rose Mylett in Poplar, and was later reported by the press to be "working energetically" with other CID officers to elucidate the mystery. The records relating to the case include a short report by him dated 18 January 1889 on Thomas Bond's activities in the earlier investigations. [12]

He wrote a detailed report, dated 10 September 1889, on the investigation into the Pinchin Street Murder, and additional reports, dated 12 September 1889, on a report in the New York Herald that a man calling himself John Cleary had earlier given information about a murder in the area. [13]

In the investigation into the murder of Frances Coles in February 1891 he took the statement of the suspect James Sadler on 14 February, and wrote a detailed report on Sadler's personal history, dated 21 February. Ten months later, on 11 December, he interviewed Sadler's wife, who had complained that her husband had assaulted her. [14]

The official files also record his activities in the investigation of various theories and suspects: the contemporary cattle-boat theory of Edward Larkins,[15] accusations made in December 1888 by and about Robert Donston Stephenson,[16] a claim in the press in September 1889 that Dr Lyttleton Forbes Winslow had identified the killer,[17] a fanciful accusation in October 1889 against a doctor in Kensington[18] and a report in November 1889 of a conversation overheard in Genoa two years earlier.[19] It's perhaps appropriate that the last document in the official files, a report dated 18 October 1896 on an anonymous letter signed 'Jack the Ripper', concludes with a comment on the letter by Superintendent Swanson.[20]

Swanson is said to have disapproved of police memoirs[21], and is not known to have made any public statement of his views on the identity of Jack the Ripper. But according to a report published by the Pall Mall Gazette on 7 May 1895, he had developed a theory by that time: "The theory entitled to most respect, because it was presumably based upon the best knowledge, was that of Chief Inspector Swanson, the officer who was associated with the investigation of all the murders, and Mr. Swanson believed the crimes to have been the work of a man who is now dead."

More detailed comments are to be found in the annotations, known as the Swanson Marginalia, in his copy of Sir Robert Anderson's memoirs, The Lighter Side of My Official Life (1910). 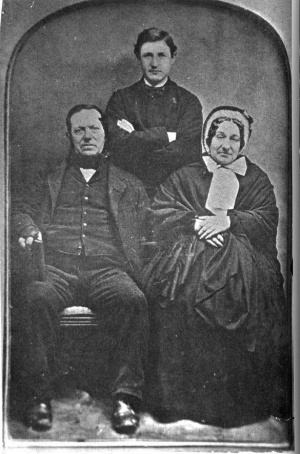 Photograph of Donald Sutherland Swanson with his parents, c. 1870 (courtesy of the Swanson family).

Donald Swanson was born in August 1848 in Thurso, Caithness, Scotland, the son of John Swanson, a brewer and distiller, and his wife Mary Thomson. [22] His middle name, 'Sutherland', appears to have been the maiden name of his maternal grandmother. [23]

According to Begg[24], he was educated at the Miller Institution on Sinclair Street in Thurso, studied Greek and Latin, was described as "a brilliant student" and afterwards taught for a brief time. (In his police Medical History his former occupation is given as "School Master".[11])

He probably left Thurso for London in 1867, as his testimonials from two Thurso men stated that they had known him until that year (see below).

He wrote a letter of application to join the Metropolitan Police on 20 March 1868, in response to an advertisement in the Daily Telegraph. At the time he had been working as a clerk for several months for John Meikle of 8 Catherine Court, Seething Lane, from where his letter of application was addressed; his own address was given as 39 King Street, Regent Street. Meikle had "known of him for many years" and recommended him highly, but was due to give up business in a few weeks. Swanson's letter concluded, "I am 19 years of age and do not so much desire a large salary as a good opening at a moderate one". [11] [24] [25]

His decision to pursue a career in the police force may have owed something to family connections. Not only was his cousin John McDonald a London police officer (see below), but there was also a Thurso-born Inspector Donald Swanson in the Metropolitan Police's A Division at the time. He was surely related somehow to the younger Donald, and it was he who authenticated the signatures of the men who provided testimonials when he applied to join the force. [26]

In the 1871 census he is recorded as a cousin in the household of John McDonald, a police officer aged 29 and born in Scotland, and his family at 1 New Willingham Terrace, St Pancras.[27]

He received numerous commendations between 1877 and his retirement in 1903. He was also disciplined several times - for example in 1869 for receiving a shilling from a prisoner at King Street Station for procuring him bail (for which he was ordered to refund the money and cautioned), in 1870 for being late for roll call and climbing over the railings of Number 1 Section House at King Street Station to avoid detection (for which he was fined 2 shillings and cautioned) and in 1874 for being outside the Lion in Carlton Square with his armband off (for which he was fined 5 shillings). [11][24]

Swanson recorded details of many of the interesting cases he had investigated in the 1870s and early 1880s in a small notebook, now in the Crime Museum at Scotland Yard. Unfortunately the Whitechapel Murders are not included. Begg et al. summarise the cases in which Swanson took most pride, based on family papers and notebooks, as follows: "the recovery of the Countess of Dysart's jewels; of a stolen Gainsborough painting; the tracking and arrest of a now-forgotten confidence trickster; and a crackdown on 'rent boys' (blackmailing homosexual prostitutes) in 1897." [21] He gave evidence at the Old Bailey on a number of occasions between 1878 and 1895 [28], and was mentioned in several other trials. [29]

On 23 May 1878 he married Julia Ann Nevill at West Ham. She had been born in 1854 at Hoxton, and was the daughter of James Nevill, a licensed victualler, and his wife Sarah Ann (nee Turney). [30]

Donald and his wife Julia had six children, one of whom appears to have died in infancy.[31] The others were[32]:

He was an Inspector by the date of the 1881 census, in which the family is recorded at 1 Grove Cottages, Lambeth.[33]

In 1881 he arrested George Drevor, a merchant navy captain who had sent threatening letters to the wreck commissioner after his certificate was suspended. Drevor suffered from the curious delusion that he had been chosen by God to discover the sea serpent. He showed Swanson the serpent, preserved in a bottle of spirits, "about 4ft or 5ft long, and somewhat peculiar formation." [34]

In July 1881 he was involved in a much more serious case - he was rewarded for his "energy and zeal" in the arrest of Percy Lefroy Mapleton, who had murdered Isaac Gold in a railway carriage.[35]

In September 1889, he met two French newspaper reporters - one of whom described him as "un véritable gentleman" - and arranged to meet them the following day at Leman Street Police Station. [36]

In July 1890 a strange complaint was made by one William Billings, in a semi-literate letter addressed from the Scotch Store, Whitefriars, Fleet Street, that Swanson, in the presence of Moore, had told Billings he would kick him "with his foot". [11]

In 1891 he was involved in the investigation of a bizarre fraud attempt by a man named Edward Pinter, who tried to obtain £40,000 in gold from a jeweller by pretending that he had discovered the philosopher's stone and could make one sovereign into three. Swanson concealed himself in the jeweller's workshop in Clerkenwell while Pinter demonstrated the technique. [38]

In 1895 he travelled to Jersey to bring back to London Leonard Harper, who was accused of fraud in New Zealand. [39]

In 1896 he was involved in the recovery of jewellery valued at £20,000, which had been stolen from the home of I. Townsend Burden, a New York millionaire, by his valet and footman. He was initially expected to receive a £500 share of the total reward of £2000, but a series of law suits followed, and the matter was still under dispute more than two years later. [40]

In 1897 a New York Times reporter, on a sightseeing tour of London, visited Swanson in his "private den". He regretted that he was unable to show the reporter the Rogues' Gallery, as that would be unfair to reformed criminals, but he arranged for him to be taken to see Bow Street Police Court the next day. [41]

In the 1901 census the family is recorded at 1 Stockwell Park Walk, Lambeth.[42]

In 1901, in collaboration with Pinkerton's Detective Agency, he arranged for the return of Gainsborough's portrait of Georgiana, Duchess of Devonshire, which had been stolen from Bond Street by Adam Worth 25 years earlier. [43]

According to Begg et al. in retirement he remained in correspondence with Sir Robert Anderson, whom he described as his "old master", until the latter's death, and was a witness of his will. He retained all his faculties, and spent a great deal of his time in a greenhouse or potting shed tying flies for his summer fishing holidays and reading and annotating books, especially on philosophy. [21][44] He is said to have returned year after year to his native Scotland for his holidays, and to have enjoyed fishing on sea, loch or river.[45]

In the 1911 census the family is again recorded at 1 Stockwell Park Walk, Lambeth.[46]