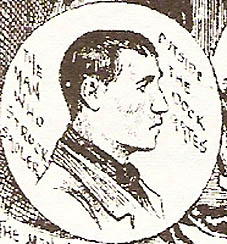 A dock labourer residing at a lodging house in Upper East Smithfield[1], he appeared at the third day of the Coles inquest in relation to an altercation he had with James Sadler by the gate of the London Docks on the morning of 13th February 1891. He stated:

"On the 12th [sic] of February, about 1:15, I was at the entrance to the London Docks with a friend, when a man who was very drunk began to abuse us and struck at my mate, who got out of the way. I struck the man in the side with my fist, and he fell down, striking his head against the dock gate. We walked away and left the man on the ground. After we had been in the lodging-house about ten minutes the man I had struck came into the kitchen. I noticed his head was bleeding and the blood running down his face. The landlord told the man to go to the hospital and get his head dressed, and then he could have a bed. The man then left the house. I did not see him again, and I do not know if he is the man now in custody."

The inquest was in no doubt that the man in question was James Sadler.[2]