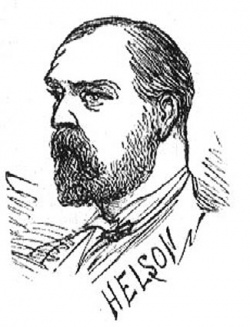 Joined Metropolitan Police on 4th January 1869; promoted to Sergeant and transferred to L-division (Lambeth) in May 1872. Promoted to Local Inspector of J-division (Bethnal Green) on 24th October 1887[1]. Living at 41 Rutland Road, Hackney in 1888, where he was also a close neighbour of Sergeant George Godley[2].

Inspector Helson was notified of the murder of Mary Ann Nichols at 6.45am, 31st August 1888. He went to the mortuary in Old Montague Street and saw the body being stripped and was shown the extent of the mutilations. He examined the murder scene after the blood had been washed away and was of the opinion that Nichols was murdered where she was found. He subsequently took charge of the investigation[3].