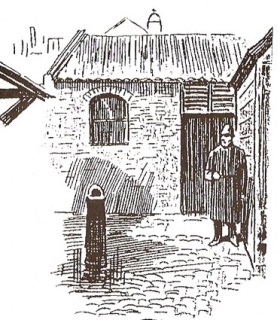 The western section of the street (as far as today's Greatorex Street) was certainly in evidence by the 1670s (known simply as Montague Street) and was probably built up when the east side of Brick Lane was being developed in the 1650s. Much of the north side was rural at this time, however, with the south side comprising of scattered properties and gardens[1]. This state of affairs appeared to exist into the mid-18th century - the street was extended eastwards by this time but the newer pathways were as yet unnamed[2][3]. By the beginning of the 19th century, these easterly extentions were known as Rope Walk (later Chapel Lane) and Princes Row[4]. This part eventually became Princes Street. Princes Street was formerly the home of Matthew Packer, involved in the events surrounding Elizabeth Stride's murder[5].

To the south of Princes Street was the Whitechapel Workhouse, built on Whitechapel Road by 1827 and abutting this was a burial ground, originally an overspill for St Mary Matfelon[6]. Adjacent to the workhouse was the Davenant Foundation School which had been founded in 1680.

In 1874, Montague Street and Princes Street were renamed Old Montague Street and the south side had become built up. The mortuary connected to the workhouse (invariably referred to as the Whitechapel or Old Montague Street Mortuary) became the only such facilities in the district, amounting to little more than a shed and accessible by gates in Eagle Place[7]. The bodies of Whitechapel Murder victims Mary Ann Nichols, Annie Chapman, Alice McKenzie and Frances Coles were taken here. The conditions were considered unsatisfactory for conducting post-mortem examinations, as highlighted by the comments made by Dr George Bagster Phillips during the Chapman inquest:

"It was under great difficulty he could make his examination, and, as on many occasions he had met with similar difficulties, he now raised his protest, as he had previously done, that members in his profession should be called upon to perform their duties in these inadequate circumstances. There were no adequate conveniences for a post-mortem examination; and at particular seasons of the year it was dangerous to the operator."[8] 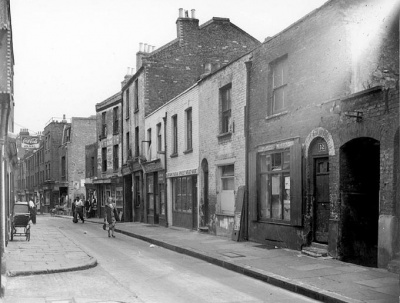 By the start of the 20th century, Old Montague Street was mostly populated (95-100%) by Jews[9], there being no fewer than twelve synagogues in the immediate area - Dunk Street alone could boast five. Old Montague Street was home to the Kehol Chasidim and Chevra Chass Synagogues at Nos.5 and 42 respectively. Most of these were closed by the 1960s, with only Great Garden Street Synagogue and its popular Kosher Luncheon Club lasting into the 1990s[10][11].

The site of the former Whitechapel Mortuary was covered by new buildings erected for the Davenant School in 1898, with the former burial ground becoming the playground.

As a consequence of the widespread migration of East End Jews to the London suburbs following World War 2, the fortunes of Old Montague Street began a rapid downturn. By the 1960s, many properties had become slums, with piecemeal demolition unresolved by new development. Those that remained were in a poor state of repair, generating a distinctly squalid air. Pupils from the Davenant School were warned to avoid Old Montague Street, or at least not linger there on account of the meths drinkers and prostitutes who had by this time gravitated towards the area[12]. It is seen at this time in the film The London Nobody Knows, made in 1967. Several new blocks of housing were built on the north side (on the site of Dunk and King Edward Streets) in the mid-1960s, but it was in the early 1970s that a concerted effort at slum clearance was undertaken, ending in the demolition of several tributaries such as the reknowned Black Lion Yard.

Further redevelopment in the 1980s and 1990s resulted in new estates replacing the old Davenant School classrooms (where the Mortuary once stood) and numerous office premises, particularly on the south side. The oldest surviving buildings are at the junction with Brick Lane.