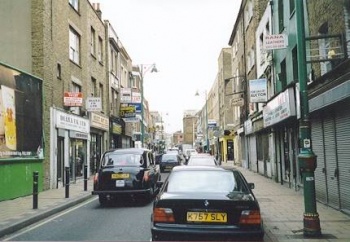 Brick Lane was so named as early as 1550 after the two tile garths which stood on its eastern side, these being places where tile or brick clay was dug. The lane already had buildings on it by the 1650's, on the east side as far as modern Hanbury Street and the Fossan estates (which included the Flower and Dean Street rookery) soon followed on the west side.

Land to the north of present Hanbury Street was acquired for the Black Eagle Brewery in the late 1600's and the earliest reference to the brewing here is a reference to Joseph Truman, brewer 'of Brick Lane' in 1683. By 1701, the nucleus of the brewery was in evidence.[1]

Building continued in earnest over the next 100 years and by 1746, the street was completely built up.[2] The 'Neuve Eglise' the former Huguenot Chapel at the corner with Fournier Street was built in 1743 (now the Jamme Masjid Mosque).

The southern stretch (today's Osborn Street) was little more than a narrow dirt track and acquired the nickname 'Dirty Lane'. Brick Lane and many of its surrounding streets were paved c.1772 and 'Dirty Lane' was widened to improve access to Whitechapel Road c.1778.[3]

By the late-Victorian period, Brick Lane would have consisted of a wide range of premises such as shops, pubs and lodging houses as well as factories and timberyards. The street was renumbered on 21st December 1883.

Emma Elizabeth Smith claimed to have been attacked by three men on the corner with Wentworth Street, opposite Taylor Bros. chocolate and mustard mill, though this may well be the corner with Osborn Street.

The surgery of Dr Timothy Killeen was at 68 Brick Lane; he was called to examine the body of Martha Tabram in George Yard Buildings at 5.30am on the morning of 7th August 1888. The Two Brewers pub was where Tabram and Mary Ann Connelly met two soldiers on the night of 6th August 1888. Mary Ann Nichols was allegedly seen leaving the 'Frying Pan' pub at 12.30pm on 31st August 1888, and two hours later was met by Emily Holland at the junction of Whitechapel Road and Osborn Street.

Mary Jane Kelly and Joseph Barnett had lodgings in Brick Lane in late 1887 to early 1888, before moving to 13 Miller's Court.[4]

In the late 19th and early 20th centuries, Brick Lane became a centre for Jewish settlement, with businesses leaning heavily towards the garment trade. In 1897 the Huguenot Church on the corner with Fournier Street became the Spitalfields Great Synagogue (Machzike Adass) and Jewish vapour baths were situated at 86 Brick Lane. Many Jewish families began to leave the East End for the north London suburbs following the Second World War, although the two bagel shops at the Bethnal Green end of the street are the only visible surviving legacy. There are still a few Jewish residents left, however.[5]

Male Bangladeshi immigrants began to appear in the area from the late 1950s, taking over many of the clothing shops and factories, with new arrivals reaching a peak in the 1970s and 80s when families followed suit once the original settlers had become established[6] . As a result, the synagogue converted to the Jamme Masjid Mosque in 1976. Brick Lane's first 'curry house' was the Nazrul at No.130, established in 1971, but since then it has been joined by many others, to the point where the entire street from Osborn Street to the brewery appears to consist of nothing but restaurants, a situation prevalent since the mid-1990s. This area is now known as 'Banglatown'.

With the coversion of the brewery into an arts/entertainment/leisure complex following its closure in 1988, Brick Lane has been transformed into one of the most vibrant parts of the East End, attracting visitors from all over the world. The brewery site is particularly popular with the younger crowd due to its bars and nightclubs. It is intersting to note that Brick Lane itself has no pubs - all have been converted for other purposes (see Frying Pan and Two Brewers), probably a side-effect of muslim predominance in the area.

New media attention on Brick Lane is evident in its popularity as a filming location, notably for music videos, including Amy Winehouse's 'F***-me Pumps' (2003) and The Killers 'All These Things That I've Done' (2004), which also had sequences filmed in nearby Grey Eagle Street.

The Killers: 'All These Things That I've Done' (UK promo video)