Important thoroughfare running east-west from the junction of Brick Lane, Osborn Street and Old Montague Street to Middlesex Street, forming part of the boundary between Spitalfields and St Mary's Whitechapel.

The earliest depiction of Wentworth Street appears c.1560[1], bounded by hedges. However the area immediately east of Petticoat Lane (Middlesex Street) was built up by the 1640s with substantial houses divided by yards and gardens. The southern side of Wentworth Street had properties whereas the northern side formed the boundary of the Tenter Ground, an open space used for stretching and drying silk (there were several 'tenter grounds' in the immediate area). The northern side east of Brick Lane formed the southern boundary of the Fossan Estate.

The street was so named after Thomas Wentworth, Earl of Cleveland who owned much land in the area in the 1630s and 1640s, although early maps call it 'Wentford Street'[2] and 'Winford Street'[3], probably both unintentional errors.

The entire length of Wentworth Street from Petticoat Lane to Brick Lane was strongly defined by buildings by the 1740s[4]. By the 19th century, much of the street had fallen on hard times, despite being part of the thriving Petticoat Lane Market. Gustave Dore portrayed it as a slum in an evocative illustration in 1872[5]. The western half of the street was notable for its Jewish inhabitants in the late 19th and early 20th centuries and has long been a part of Petticoat Lane market which, unlike its more famous neighbour, is open every day except saturdays. The eastern half was of poorer character and was part of the slum district defined by places such as George Yard, George Street and Thrawl Street. 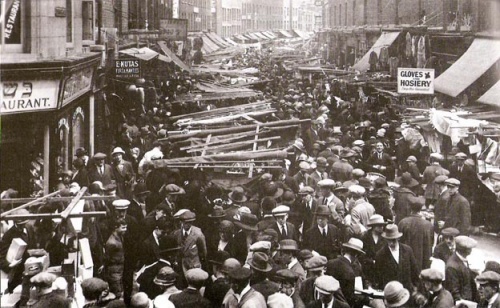 Emma Elizabeth Smith was (by her own account) allegedly attacked near the junction with Brick Lane/Osborn Street. The actual site where the incident took place is variously given as being: in Osborn Street, near Taylor's Cocoa factory[6][7]; the corner of Brick Lane and Wentworth Street[8]; opposite 10 Brick Lane[9].

At 2.00am on the morning of Martha Tabram's murder, 7th August 1888, PC Thomas Barrett saw a soldier (a grenadier) on Wentworth Street at the junction with George Yard - when asked what he was doing, the soldier commented that he was waiting for a 'chum' who who had gone with a girl. Barrett was unable to satisfactorily identify this man in a subsequent identity parade.

James Sadler said that he and Frances Coles had had some food at Mrs Shuttleworth's eating house at 4 Wentworth Street on the eve of her murder.[10] According to Joseph Haswell, Coles came back early the next morning, but had to be escorted out.[11]

Near the junction with Brick Lane was once Wildermuth's Lodging House - during survey work for Charles Booth's poverty map (1898-9), Sergeant French told the researcher that it was one of the largest of its kind in London, holding up to 800 persons[12]. In 1901, it was recorded as sleeping nearly 900[13]; Universal House now stands on the site.

Much of this area was redeveloped in the 1880s and 1890s following the erection of Lolesworth Buildings and Stafford House on the north side. They were demolished by 1980 to make way for the Toynbee Estate (1982-4), although College Buildings (part of Toynbee Hall), built on the south side around the same time, survive.

The market end of the street was redeveloped on several occasions, most notably with the construction of Wentworth Dwellings (1886-7) on the south side and the London County Council's Holland Estate on the north side (1930s). It was also widened at the junction with Old Castle Street in the 1920s.