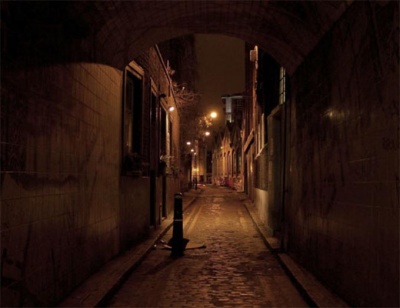 Narrow street running north-south from Wentworth Street to Whitechapel High Street. The High Street entrance was (and still is) accessible via a covered archway. It became a no through-road at this end c.2006.

In evidence as early as 1676[1], George Yard was one of many such alleys along the main thoroughfare of Whitechapel High Street and its claustrophobic mixture of lodging houses, stables and narrow courts gave it a mean reputation. In 1822 it was described as a "notorious rendez-vous of thieves" and went on to be the scene of every conceivable crime, including prostitution, robbery, violent assault (of both citizens and police) rioting and stabbings.[2]

In 1859, a PC Bone observed a thief running into George Yard with a stolen handbag, but gave up the chase: "It was perfectly useless to follow him... as the place was filled with the worse characters and was full of holes and turnings as a rabbit warren"[3]

Rebuilding did help to improve the condition and reputation of George Yard; initially, a ragged school was set up there in 1861, followed by demolition of some of its worst slums in the 1870s and the subsequent building of new premises. It was this latter period of redevelopment that saw the construction of George Yard Buildings, St. George's House and the Sir George's Dwelling for Girls (which is still standing). Martha Tabram took her soldier client into George Yard at approx.11.45pm on 6th August and her body was found on the first-floor landing of George Yard Buildings at 4.50am the following morning by John Reeves.

Apart from the Sir George's Dwelling, no buildings from 1888 remain, despite the apparent age of some on the eastern side. Commercial Street School (now Canon Barnett Primary) was built c.1900 on the west side and Sunley House, a residential block belonging to Toynbee Hall, was built on the site of George Yard Buildings and St George's House in 1973. Opposite Sunley House are premises dating from the early 1990s. The oldest buildings on Gunthorpe Street are the White Hart pub at the corner with Whitechapel High Street and the ex-council depot on the east side which probably dates from the early 1900s.

Gunthorpe Street does, however still convey the atmosphere of a bygone era, complete with cobbles; it is popular with guided tours and has been photographed on countless occasions for this reason.