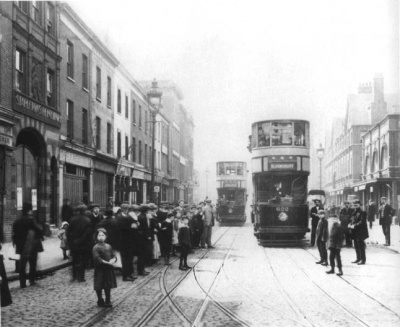 Major thoroughfare running north-south from Shoreditch High Street to Whitechapel High Street. Designated as part of the A1202.

The first plans for a new street in Spitalfields and Whitechapel was made by a Select Committee on Metropolitan Improvements in August 1836. This Committee recommended the construction of a street ’from Finsbury Square to Whitechapel Church and the Commercial Road’, to run in a straight line from the Bishopsgate end of Middlesex Street to near the southern end of Osborn Street. An alternative scheme put to the Committee by the chairman of the Tower Hamlets Commissioners of Sewers was, however, closer to the line finally chosen.

By 1838, the proposed path of the new road was beginning to take shape after taking into consideration the opinions of various organisations and it was considered fortuitous that the road would cut through and remove numerous slums such as those in Rose Lane and Vine Street. Therefore, not only would it link northern routes to Commercial Road and thus the docks, but also achieve ’the destruction of a neighbourhood inhabited by persons addicted to vices and immorality of the worst description’ (the linking of Thrawl Street to the new street via Keate Court in 1859 was considered a highly desirable development).

The work of clearing these densely packed and often dangerous slums was no mean task. Men worked at night to empty and fill in the ’privy-pits’ in the congested courts on the line of the street. In November of 1844, the gas-pipes were laid and by December the street line from Whitechapel High Street to Christ Church had been completely marked out. The termination of the street at the church was ridiculed ’as if the only object of the line was to enable the sailors of our merchantmen to attend divine service on Sunday’[1]

The laying of the new road effectively wiped out a number of streets. They were Essex Street, Rose Lane, Red Lion Street, Vine Street and much of Wheler Street.

The original name for the new road was Spital Street, but as a street of this name already existed nearby (in Mile End New Town), the name Commercial Street was agreed in September 1845 with building commencing in October.

An act of July 1846 authorised the extention of Commercial Street northwards (from Christ Church to Shoreditch High Street), though building did not start until 1851. By 1856 it had been paved as far as Fleur-de-lis Street and was finally completed in 1858.

Commercial Street presented a strange assortment of architechtural styles, but the most popular became known as 'warehouse gothic', examples of which are still extant today.[2]

The cutting of Commercial Street through the notorious rookeries of Spitalfields failed to alleviate the criminality of the district, despite opening up notorious thoroughfares to greater scrutiny. Thus it played an important part in the lives of the local community and indeed the lives of the victims of the Whitechapel Murders.

Amelia Palmer met Annie Chapman on Commercial Street near Christ Church on 4th September 1888. Chapman complained of feeling unwell and Palmer gave her 2d for tea, warning her not to spend it on rum.[3] 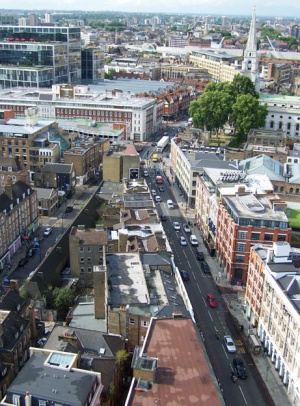 Commercial Street is also where Joseph Barnett first met Mary Jane Kelly on April 8th 1887. After this they decided to meet up again the next day.[4]

At the time of Kelly's murder, witness George Hutchinson was staying at the Victoria Working Men's Home. On 9th November 1888, Hutchinson had been walking along Commercial Street at 2.00am when he briefly met Kelly and later saw a man approach her; Hutchinson stood under the lamp of the Queen's Head pub to get a good look at the man as the couple passed.[5]

Alice McKenzie apparently took George Dixon, a blind boy, to a pub near the Royal Cambridge Music Hall on the night of her murder. Dixon heard her ask a man for a drink, though there is little to suggest that this incident was in any way connected with her murder.[6]

"Gangs of navvies descended on Whitechapel and Spitalfields and work commenced on digging up the entire length of Commercial Street and laying track. The work continued day and night until completion in November 1888. During the construction Emma Smith, Martha Tabram, Mary Ann Nichols, Annie Chapman, Elizabeth Stride and Catherine Eddowes were murdered. Coincidence? The diverted horse-drawn traffic from Commercial Street was horrendous and the `ladies of the night and their clients were hardly able to conduct their business. Could the disruption explain why there were no murders during October and why Mary Kelly was killed indoors? 15th November 1888, a week after Kelly s murder, the Commercial Street tramway finally opened with a line of brownpainted horse trams running between Bloomsbury and Poplar (fare 3d). Near the latter line on 20th December 1888 the body of Rose Mylett was found just off the High Street."[7]

Though probably not as conspicuous as their 19th-century predecessors, prostitutes still solicit along Commercial Street, particularly at the northern end towards Shoreditch, but also near the junction with Wentworth Street.