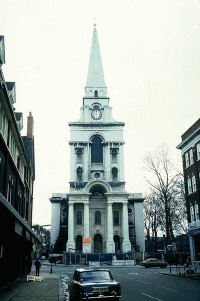 An Anglican church built between 1714 and 1729 to a design by Nicholas Hawksmoor. It was one of the first (and often considered the finest) of the so-called "Commissioners' Churches", built for the Commission for Building Fifty New Churches, which had been established by an Act of Parliament in 1711. Only twelve of the planned fifty churches were built, of which six were designed by Hawksmoor (his other well-known East London churches are St George In the East, Shadwell and St Anne's, Limehouse).

The commission's purpose was to acquire sites and build new churches to serve London' newest areas - Spitalfields was inhabited by many French Huguenot settlers, protestants who had no allegiance to the Church of England and the construction of Christ Church particularly was seen as a show of authority by the church. An early proposition was to have it situated on the south side of Browne's Lane (today's Hanbury Street), but the site was moved further south, facing Red Lion Street[1]. Although some huguenots used the church, most of them preferred to use their own modest chapels, of which the building on the corner of Brick Lane and Fournier Street is a famous surviving example.

Over the centuries the church has undergone a number of alterations. The spire was simplified in the 1830s and disasterous changes were made to the interior in 1866, when Ewan Christian (later architect of the National Portrait Gallery in London) removed the galleries and the box pews, blocked up the windows in the aisles and lengthened the gallery windows. The church began to deteriorate during the 20th century and by 1957, services were being held elsewhere as the roof was considered too dangerous.

It escaped demolition thanks to the efforts of the Hawksmoor Committee, who managed to save the church from developers and help raise awareness about the building. In 1966, the roof was rebuilt and a rehabilitation centre for homeless alcoholic men was set up in the crypt[2]. The churchyard, known locally as 'Itchy Park' was made a public garden in 1891 and was cleared of most of its monuments and gravestones in 1950[3]. 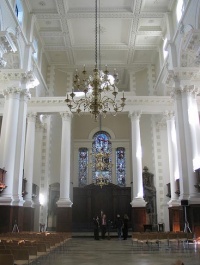 In 1976 The 'Friends of Christ Church Spitalfields' was formed to restore the church and bring it back into regular use. The interior was restored, using as much of the original designs as possible, and services were able to start again in 1987. Exterior renovation took place in 1997 and much of the project was complete by 2004. The church now appears as it would have done c.1750, though the Richard Bridge organ (1735) is currently in storage awaiting funds to be restored and reinstalled.[4]

Christ Church is now one of East London's most famous landmarks and is widely considered to be Nicholas Hawksmoor's masterpiece. It is open most days and is staffed by volunteers. It holds services on tuesday lunchtimes as well as the traditional sunday services.

Along with the Ten Bells, Christchurch was recreated for the film 'From Hell' - the lower half was a set and the top half was created using CGI effects.