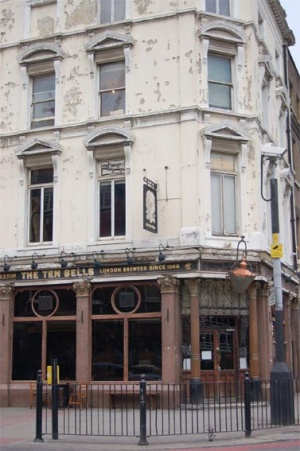 The most well-known surviving pub associated with the Whitechapel Murders and victims. The Ten Bells has been recorded on this site since 1753, but as with many such establishments, may date back further. The current building is from 1845 and contains the original decorative Victorian tiling depicting 'Spitalfields in Olden Times'. In 1888, the landlord was John Waldren and it was formerly a Truman's house.[1]

Despite its associations, evidence of the victims patronising the pub is sparse to say the least. On the morning of her murder, Annie Chapman was alleged to have been drinking there at around 5.00am when a hideous looking man wearing a skull cap put his head round the door and beckoned her out, presumably to her doom. The story was attributed to 'the potman at the Ten Bells' and reported in the Manchester Guardian without mentioning Chapman's name. The description of the man fitted the appearance of one Edward McKenna who was subsequently arrested, but later released after he was able to provide an alibi.[2]

Informant Elizabeth Foster also told the press that she had been drinking in the pub with Mary Jane Kelly on the evening of 8th November and Kelly apparently left at about 7.05pm[3]; there is no official documentation to confirm this, however. Kelly was also alleged to have been seen in both the Britannia and the Horn of Plenty that night.[4]

However, due to its proximity to many of the streets where the victims lodged (see Flower and Dean Street, Thrawl Street, George Street and Dorset Street) it is likely that most (if not all) of the victims would have been familiar with the Ten Bells and drank there on occasion.

From the information on several maps, it is quite possible that the pub underwent some structural alterations between 1890 and 1894, creating the corner entrance familiar today, although no documentary evidence of such work has been found[5]. The pub became a Grade II listed building on 27th September 1973.

On 30th April 1975, following an extensive refit, the pub was reopened as the 'Jack the Ripper'. The interior was decorated with memorabilia and for a while was lauded as 'East London's newest nite-spot'. The front of the pub was adorned with a decorative panel listing the names of the victims, stating that one had 'last been seen alive leaving these premises!'[6] As the centenary approached, public feeling had begun to change and there was a great deal of protest over the pub being named after a prostitute murderer. Such feelings were exacerbated by the selling of Jack the Ripper souvenirs and a blood-red drink called the 'Ripper Tipple'.[7] In 1988, the pub reverted back to its original name.

After experimenting with entertainments such as exotic dancers in the late-1990s, the pub was put up for sale in 2001 with a price-tag of £1.2 million[8]. A sale was a long time coming and the pub was eventually sold for £950,000 after being on the market for seven months[9]. Initial worries that the premises would be converted into a member's only club or restaurant were soon allayed when the new owners stated that it would retain its use as a pub. Considerable interior alterations followed.

Since then, the Ten Bells has attempted to shake off its associations with the Whitechapel Murders - all memorabilia has gone and Ripper tours are no longer as welcome as they once were. It is now very popular with the younger crowd who have been settling into the area since the late 1990s.

The pub was featured in the film 'From Hell' and the exterior (complete with full-size Christchurch opposite) was carefully recreated on a film-lot in Prague, however, the popularity of the film also reignited interest in the pub as a 'Ripper haunt'.

The Ten Bells is also reputed to be haunted, something which certainly helped with publicity in the 1970s[10][11], and reports of paranormal activity continue to this day[12][13]

In November 2010, the pub was closed for refurbishment, with the refitting of the main ground floor bar and the conversion of upstairs rooms. It reopened on 19th November 2010.