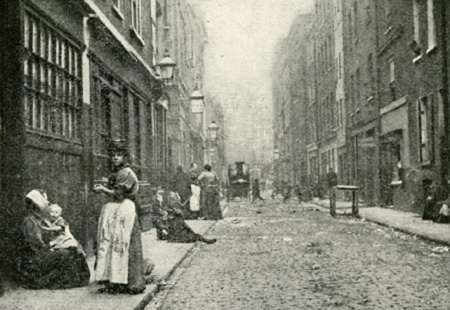 Small thoroughfare running east-west from Crispin Street to Commercial Street. Developed as a footpath across the south side of the 'Spital Field' in 1674. Originally known as Datchett Street after the Berkshire home of the Wheler family who owned much land in this area, the name was soon corrupted to Dorset Street.[1]

By the mid 18th century, Dorset Street, like many others in the area, was the home of artisans and silk weavers, living and working in four-storey townhouses with attic workshops, however these prosperous times came to an end by the 1840s and many properties were turned into common lodging houses. A pub, the Blue Coat Boy, stood on the north side (first recorded in 1825, but thought to be considerably older), approximately half way along the street and is believed to be one of the first pubs to serve the nearby market. The Blue Coat Boy was later joined by two more pubs, The Horn of Plenty on the northern corner with Crispin Street and the Britannia, a beer house, on the corner with Commercial Street.[2]

There were many lodging houses in Dorset Street by 1888, at nos.9, 10, 11-12, 15-20 (Commercial Street Chambers), 28-30 and 35 (Crossingham's Lodging House), earning it the nickname of 'Dosset Street'. John McCarthy owned a chandler's shop at No.27 and also No.26, known as 'the shed'. Between these properties was a brick archway which led to Miller's Court. Mary Jane Kelly's room (No.13) was actually the partitioned-off back room of 26 Dorset Street.

The street was notable for its poor character - on March 17th 1898, it was visited by George Duckworth, a survey assistant collecting information which would eventually lead to an update of Charles Booth's 'Descriptive Map of London Poverty'. Accompanied by Sergeant French of H-division, he was taken aback by the conditions he saw:

"The worst street I have seen so far - thieves, prostitutes, bullies, all common lodging houses. Some called 'doubles' with double beds for married couples but merely another name for brothels. Women bedraggled, torn skirts, dirty, unkempt, square jaws standing about in street or on doorsteps."[3]

Dorset Street achieved further infamy on a number of occasions after Kelly's death; Mary Ann Austin died on 26th May 1901 from stab injuries received whilst she was staying at Crossingham's Lodging House the day before and Kitty Ronan was found with her throat cut in Room 20, Miller's Court on 2nd July 1909.

Probably as a result of the street's poor reputation, its name was changed to Duval Street on 28th June 1904. In 1920, the Corporation of London purchased Spitalfields Market and planned a major expansion which resulted in the construction of the Fruit Exchange and the demolition of the north side of Duval Street (including Miller's Court) in 1928. That year, the author Leonard Matters visited and photographed the street mere days before redevelopment:

"What Dorset Street was like seventy years ago can only be imagined from an inspection of the district today and a walk through narrow lanes and byways leading off Commercial Street and Brick Lane. Duval Street itself is undergoing change, and the buildings on the left-hand side going east have nearly all been torn down to make room for extensions to Spitalfields Market. 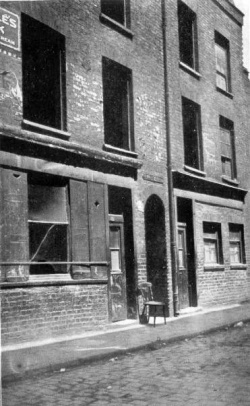 "At the time of my first visit to the neighbourhood most of the houses on the left-hand side of the street were unoccupied, and some were being demolished. The house in which Kelly was murdered was closed, save for one front room still occupied by a dreadful looking slattern who came out of Miller's Court into the sunlight and blinked at me. When she saw me focus my camera to get a picture of the front of the house, the old hag swore at me, and shuffled away down the passage.

"I took what is probably the last photograph of the house to be secured by anybody, for three days later Miller's Court and the dilapidated buildings on either side of it were nothing but a heap of bricks and mortar. The housebreakers had completely demolished the crumbling wreck of the slum dwelling in which "Jack the Ripper" committed his last crime! Miller's Court, when I saw it, was nothing but a stone flagged passage between two houses, the upper stories of which united and so formed an arch over the entrance. Over this arch there was an iron plate bearing the legend, "Miller's Court." The passage was three feet wide and about twenty feet long, and at the end of it there was a small paved yard, about fifteen feet square. Abutting on this yard, or "court", was the small back room in which the woman Kelly was killed - a dirty, damp and dismal hovel, with boarded-up windows and a padlocked door as though the place had not been occupied since the crime was committed.

"But the strange thing was that nobody in the neighbourhood seemed to know the history of Miller's Court..."[4]

The street hit the news again in February 1960 following the murder of Selwyn Cooney in a gang-related killing outside the Pen Club. But by this time, the remaining south side of Duval Street was nearing its end and it was eventually demolished in 1963. From April 1964, the whole block was a parking bay for delivery lorries and the street was effectively non-existent until the construction of the White's Row multi-storey car park c.1971 reemphasised its use as a thoroughfare, albeit limited[5]. On 28th January 2009, it was closed to the public, allegedly for health and safety reasons[6]. Such restrictions appear to have been subsequently relaxed.

Dorset Street is now an unnamed private road which does not quite follow the street-line of the original thoroughfare, meaning that the exact site of Kelly's murder can be seen[7]. Photographically, the street has been reasonably well-documented over the years, although pictures pre-dating the first redevelopments are scarce. Most notable are the well-used image from Jack London's People of the Abyss (c.1900) and those taken by Matters (1928).