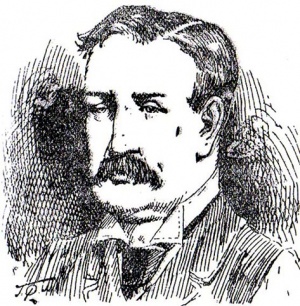 Landlord of Mary Jane Kelly, witness at her inquest and recently alleged suspect.

John 'Jack' McCarthy was born in Dieppe, France, c.1849. The eldest son of Daniel and Margaret McCarthy, his parents had left their native Ireland in 1848 and after travelling around London and the home counties, settled in Red Cross Court, Southwark. John was later joined by four brothers (Denis, Jeremiah, Timothy and Daniel) and a sister, Annie.

John McCarthy ran a chandler's shop at 27 Dorset Street. Prior to 1881, he had rented No.26 from Abraham Barnett, a Jewish glass-blower who had bought the property in the 1860s, but who had now moved to Maida Vale. McCarthy subsequently acquired the properties in Miller's Court which soon had the nickname of 'McCarthy's Rents'. Previously, the Court had been known colloquially as 'Miller's Rents', after John Miller, who had acquired the property in the 1840s.

In March 1882, John McCarthy was involved with several other men in a confrontation with police over an illegal prize-fight they had organised in St. Andrew's Hall, Tavistock Place. Among the men was Richard Smith, brother of Jimmy Smith (owner of what later became Cooney's Lodging House amongst other such properties). They were arrested and appeared at the Middlesex Sessions House in Clerkenwell, however Jimmy Smith had managed to persuade Sergeant William Thick to give the men good character references, which allowed them to avoid imprisonment, their punishment being reduced to fines.[1]

Mary Jane Kelly and Joseph Barnett had moved into 13 Miller's Court, 26 Dorset Street, around January/February 1888. At about 10.45am, 9th November, McCarthy sent Thomas Bowyer to collect Kelly's rent arrears, whereupon he discovered her body. McCarthy gave a statement to the police soon after:

I sent my man Thomas Bowyer to No 13 room Millers Court Dorset Street owned by me for the rent. Bowyer came back and called me, telling me what he had seen. I went with him back and looked through the broken window, where I saw the mutilated remains of the deceased whom I have knew as Mary Jane Kelly. I then despatched Bowyer to the Police Station Commercial Street (following myself) to acquaint the Police. The Inspector on duty returned with us to the scene at Millers Court. I let the room about ten months ago to the deceased and a man named Joe, who I believed to be her husband. It was a furnished room, at 4s/6 per week. I sent for the rent because for some time past they had not kept their payments regularly. I have since heard, the man Joe was not her husband and that he had recently left her.

Naturally, he appeared at the inquest on 12th November:

John McCarthy having been sworn deposed as follows: I am a grocer and lodging house keeper at 27 Dorset Street. - On Friday morning last about quarter to 11 I sent my man Bowyer to fetch rent from No 13 Room Millers Court. He came back in about 5 minutes and said governor I knocked at the door and could not make any one answer. I looked through the window and saw a lot of blood. I went out with him and looked through the window and saw the body and everything I said to my man don't tell anyone let us fetch the police I knew deceased as Mary Jane Kelly. I have seen the body and have no doubt as to its identity. I and Bowyer went then to the Police Court Commercial Street and saw Inspector Beck. I inquired at first for other inspectors. I told Inspector Beck what I had seen. He put on his hat and coat and came with me at once. Deceased has lived in the room with Joe for 10 months both together. They lived comfortably together but once broke the two windows - the furniture and everything in the room belongs to me. I was paid 4/6d a week for the room but rent was 29s/- in arrear, the rent was paid to me weekly the room was let weekly. I very often say deceased worse for drink she was a very quiet woman when sober but noisy when in drink he was not ever helpless when drunk.[3]

McCarthy was later to give further interviews to the press where he expanded on the morning's events:

When I looked through the window the sight I saw was more ghastly even than I had prepared myself for. On the bed lay the body, while the table was covered with lumps of flesh. Soon Superintendent Arnold arrived, and instructions to burst the door open were given. I at once forced it with a pickaxe and we entered. The sight looked like the work of a devil. The poor woman had been completely disembowelled. Her entrails were cut out and placed on a table. It was these that I had taken to be lumps of flesh. The woman's nose had been cut off, and her face was gashed and mutilated so that she was quite beyond recognition. Both her breasts, too, had been cut clean away and placed by her side. Her liver and other organs were on the table. I had heard a great deal about the Whitechapel murders, but I had never expected to see such a sight. The body was covered with blood and so was the bed. The whole scene is more than I can discribe [sic]. I hope I may never see such a sight again.[4]

Being such a prominent local figure and central to the Mary Kelly case, John McCarthy came to the attentions of the press on several subsequent occasions. He seized a suspicious looking man carrying a long knife in Dorset Street, but the man claimed he used it in business and was allowed to go[5]. Soon after, it was reported that McCarthy had turned down an offer of £25 from a woman who wished to stay at 13 Miller's Court, as well as a request from a theatrical man to have the furniture from Kelly's room.[6]

When the Daily Mail dubbed Dorset Street "the worst street in London" in 1901[7], McCarthy was on hand to stick up for his locale, giving a hearty riposte at a public meeting held in the nearby 'Duke of Wellington' pub.[8]

John McCarthy remained in Dorset Street for many years, eventually leaving when redevelopment was imminent in 1927. He moved to Clapham, South London, to be near his son Steve who had married (and separated from) music-hall star Marie Kendall. One of Steve's sons played in the theatres and had several children of his own, one of whom was the actress Justine 'Kay' Kendall (b.1927), later to marry the actor Rex Harrison.

John McCarthy died on 16th June 1934. He was buried at St Patrick's Roman Catholic Cemetery in Leytonstone, his impressive memorial being not too far from the grave of Mary Jane Kelly.

Being such a prominent figure in the saga of Mary Kelly's death, it is little surprising that he has been suggested as complicit or even a suspect for her murder. A Canadian group which included literary agent Helen Heller claimed that their researches led them to believe that McCarthy was the Ripper[9]

In August 2008, the actress Fiona Kendall-Lane appeared at a meeting of the Whitechapel Society to talk about the McCarthy 'dynasty'. Not only did she hint at a family story that John McCarthy may well have seen Mary Kelly's killer emerge from Room 13 (as he apparently kept close watch on Miller's Court day and night) but she also displayed a framed photograph of her noted ancestor. At the present time, this photograph has yet to be published[10].

Biographical information is taken from The Worst Street in London by Fiona Rule (Ian Allen 2008) unless otherwise cited.