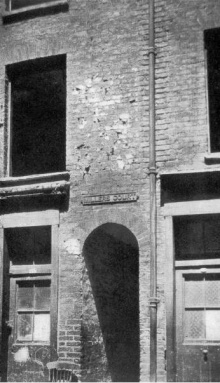 Small court running north from Dorset Street. Originally open gardens to the rear of 26 and 27 Dorset Street, the then owner of the two properties, John Miller, developed the space by building a set of cottages by 1851. Further additions followed and the court became known as 'Miller's Rents', the name by which it appears on early census returns. By 1888, Miller's Court and 26 and 27 Dorset Street were owned by John McCarthy.

It was the first archway on the right of Dorset Street coming from Commercial Street. There were six houses in the court, each whitewashed up to the first floor windows. Number 13 Miller's Court was the back parlor of 26 Dorset Street. Partitioned off from the rest of the building, it was entered from a door at the end of the arched passageway. It was the first door on the right in Miller's Court and anyone entering or leaving the court would have to pass it.

Room 13 was approximately 12 feet square. Opposite the door was a fireplace. On the left of the door and at right angles to it were two windows, one of which was close enough to the door as to be able to reach through it and unbolt the door. To the right of the door was a bedside table so close that the door would hit it when opened. Next to the table was a bed with the head against the door wall, its side against the right wall. The room contained two tables and a chair and a cheap print entitled "The Fisherman's widow" hanging over the fireplace. Opposite the fireplace was a small cupboard which contained cheap crockery, empty ginger beer bottles and a little stale bread. 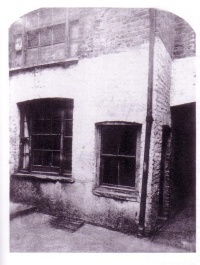 The key to the door was missing. The window closest to it was broken and stuffed with rags and you could reach the spring lock of the door through the window. A man's pilot coat hung over the window in place of a curtain. The window, according to Julia Van Turney, was broken several weeks before the murder by Kelly when she was drunk.

Also found in the room by the police was remnants of clothes in the grate of the fireplace. They had been burned in a fire so hot that it melted the spout off a nearby kettle. Maria Harvey believed the clothes were hers as she had left a hat, jacket, two men's shirts, a boy's shirt and a child's petticoat in Kelly's room. The pilot coat hanging over the window was also hers.

Kelly had taken the room under her own name and paid 4/6 per week rent. At the time of her death she was 30 shillings behind in rent.

Room 13 was re-let following the murder and it is believed that Kelly's bloodstains were not washed from the walls and floor. Photographs were taken of Kelly's body in situ as well as the exterior of Room 13, although no confirmed photograph of the interior of Miller's Court itself is known at present.