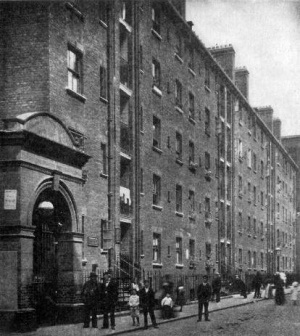 Originally built by Henry Thrall (or Thrale) c.1656, Thrawl Street ran east-west from Brick Lane as far as George Street across a former tenter field owned by the Fossan brothers, Thomas and Lewis. Most, if not all, of the properties on the street were timber-built and many were still standing as late as 1736. Little George (later Keate) Street was extended west from the junction of Thrawl and George Streets by the 1740s.

Between 1807-30, rebuilding leases were granted, but none seems to have taken place, although repairs were made albeit poorly done and Thrawl Street, like others in the neighbourhood, continued to deteriorate[1]. It soon became known for its lodging houses and mean tenements and at this time was only joined to Commercial Street by Keate Street and then a narrow alleyway called Keate Court[2]. This part was opened up c.1883 following the demolition of properties in readiness for the later construction of Charlotte De Rothschild Dwellings on the north side and Lolesworth Buildings to the south[3]. Subsequently, Keate Street was renamed as part of Thrawl Street in 1884.

In September 1888, a correspondent who signed himself ‘Ratepayer’ described Thrawl Street in less than glowing terms:

"...the population is of such a class that robberies and scenes of violence are of common occurrence. It is a risk for any respectable person to venture down the turning even in the open day. Thieves, loose women, and bad characters abound, and, although the police are not subject, perhaps, to quite the same dangers as they were a few years ago, there is still reason to believe that a constable will avoid, as far as he can, this part of his beat, unless accompanied by a brother officer..."[4]

Wilmott's Lodging House stood at 18 Thrawl Street - Mary Ann Nichols stayed here between 2nd and 24th August 1888 and was also seen there on the night of her murder. Not having the price for a bed, she ensured the deputy that she would soon have it on account of her new 'jolly bonnet'. At 2.30am the following morning, Emily Holland met Nichols at the junction of Osborn Street and Whitechapel Road and tried to get Mary Ann to return to Wilmott's with her.

In 1889, Michael Kidney, Elizabeth Stride's lover at the time of her murder, was admitted to the Whitechapel Workhouse on three separate occasions for syphilis, lumbago and dyspepsia. For the last two admissions his address was listed as 12 Thrawl Street.[5]

Following the murder of Frances Coles, an ex-client named James Murray came forward to announce how he had once met her at 18 Thrawl Street. Coles' partner, James Sadler was also set upon and allegedly robbed in Thrawl Street on the night of her murder.

The model dwellings of Thrawl Street and the surrounding area were demolished 1973-80 and all that remains are some buildings at the Commercial Street end and the Frying Pan pub (now a restaurant) on the corner with Brick Lane. Officially, the street today is a winding road that curves around the Flower and Dean Estate (built 1982-4). Where Flower and Dean Walk emerges onto Wentworth Street stands one of the two arches that furnished the entrances to the Charlotte de Rothschild Dwellings courtyard. This particular arch is the one that originally stood on Thrawl Street and can be seen in its original position in a photograph taken for Jack London's People Of The Abyss (1902).

Thrawl Street has been reasonably well-documented photographically over the years, particularly in the 1960s and early 1970s, although there seem to be no known photographs dating from before the rebuilding of the late 19th century.

It can be seen during a brief sequence in the film The London Nobody Knows (1967).