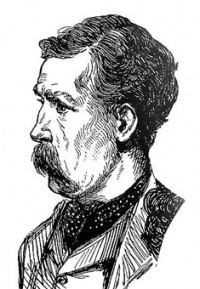 Elizabeth Stride's lover at the time of her death, he worked as a waterside labourer and had been living at 36 Devonshire Street, Commercial Road[1]. He had known Stride for about three years and they had been living together for most of that time, although at the inquest he gave her age as being between 36 and 38, suggesting that she looked younger than she actually was.[2]

His knowledge of her background was not dissimilar to that stated by Charles Preston, including the false tale of John Stride's death on the Princess Alice. Their relationship was obviously a stormy one and he claimed that she often went absent when she was drinking, despite his attempts to keep her in. He believed that her absences totalled about five months over the course of three years.[3]

It is possible that Kidney's relationship with Stride occasionally spilled over into violence, perhaps on account of her behaviour, for on 6th April 1887 she accused him of assault, but failed to turn up at the hearing against him at Thames Magistrate's Court[4]. In July 1888, Kidney was sent down for three days for being drunk and disorderly and using obscene language.

Kidney last saw Stride on Tuesday 25th September 1888 in Commercial Street as he went to work and he was expecting to see her at home when he got back. They had not quarreled and she was perfectly sober when they parted. He did not believe she was seeing anybody else because in his own words, "she liked me better than any one else" and it was usually the drink that made her go off. He was not unduly concerned about her absence in the five days prior to her death.

On 1st October 1888, Michael Kidney turned up drunk at Leman Street Police Station, announcing that if had he been the policeman on whose beat Stride's body had been found, he would have killed himself. He also boasted that he could catch the killer if he had the men at his disposal; "If I was to place the men myself I could capture the murderer. He would be caught in the act". He had no further information to give.[5]

On 11th June 1889 he was admitted to the Whitechapel Workhouse Infirmary for syphilis. On 17th August 1889 he was admitted once again, this time for lumbago. On 11th October, same year, he was once again admitted to the Whitechapel Workhouse for dyspepsia. On the latter two occasions, Kidney was recorded as coming from 12 Thrawl Street and his age was given as 40 (suggesting he was born in 1849).[6]

It has been suggested that Michael Kidney was responsible for the death of Elizabeth Stride.[7][8]

Kidney - for and against. Discussion thread on Casebook