Major thoroughfare running east-west from the junction of Burdett Road and East India Dock Road to Braham Street. Designated the A13. 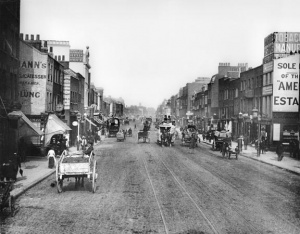 In 1802, the East India Company secured an Act of Parliament for the building of a new road beginning at the new West India Dock Gate and terminating at Church Lane, Whitechapel. The line of the new road more or less followed the path of an existing one called White Horse Lane. This pre-existent pathway through fields can be seen on maps of the time with the line of the new road already marked in[1]. This first stage of the road was constructed in 1803.

The development of the road into a residential neighbourhood began with the establishment of sugar refineries in St. George's-in-the-East, which led to the erection of small houses for the accommodation of the workers employed in that industry. On the Stepney stretch, an attractive residential district for the well-to-do was built, forming 'Terraces' and 'Places' and for a while at least, the Commercial Road had an air of prosperity about it, reinforced by the appearance of shops.

The increase in heavy traffic along the road during the 1820s and 1830s gradually saw this attractiveness begin to dwindle in the eyes of those who lived there and at this time it also became a toll road[2]. Charles Dickens described the Commercial Road before it was paved in 1855:

"Pleasantly wallowing in the abundant mud of that thoroughfare and greatly enjoying the huge piles of buildings belonging to the sugar refiners, the little masts and vanes in small back gardens in back streets, the neighbouring canals and docks, the India vans lumbering along their stone tramway, and the pawnbrokers' shops where hard-up mates had pawned so many sextants and quadrants that I should have bought a few cheap if I had the least notion how to use them."[3]

Commercial Road was extended west to meet Whitechapel High Street at 'Gardiner's Corner' in 1870; in 1874 it was renumbered, resulting in the integration of the numerous terraces and the local feeling of pride rapidly turned to one of indifference.[4]

Annie Chapman met her brother, Fountain Smith, on Commercial Road around mid-to-late August 1888. Fountain gave Annie 2s, but found out little else about her during this obviously short encounter[5]. Rose Mylett was also seen, apparently drunk, with two sailors outside The George pub at 2.30am, 20th December 1888, by Alice Graves.[6]

On the morning of Elizabeth Stride's murder, Morris Eagle ran from Dutfield's Yard and found PC Henry Lamb on duty at the corner of Grove Street with PC Edward Collins. According to Catherine Lane, Elizabeth Stride also claimed to have lived on Devonshire Street (off Commercial Road) with Michael Kidney[7],and Martha Tabram had lodged at 4 Star Place, Star Street, Commercial Road before absconding with substantial rent arrears[8].

The development of a new one-way system in the mid-to-late 1960s effectively cut off the end of Commercial Road at its western end. A fire at the closed Gardiner's department store (Gardiner's Corner) in 1972 resulted in rebuilding, the narrow remnant of Commercial Road becoming Drum Street.