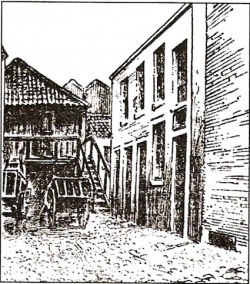 Dutfield's Yard as depicted in Famous Crimes, Past and Present, Harold Furniss 1903.

A narrow yard between Nos.40 (the International Working Men's Educational Club) and 42 Berner Street. The entrance to the yard was approx. 9 feet wide, with a pair of wooden gates which provided access. Each gate was approx. 4 feet 6inches wide. The left gate was fitted with a wicket (a small door) to be used when the gates proper were closed. Lettered in white paint on the gates was "W. Hindley, Sack Manufacturer" and "A. Dutfield, Van and Cart Builder". Arthur Dutfield had actually moved his part of the business to 10-18 Pinchin Street two years prior to the murder[1] . The cart making business was located next to an unused stable on the west side if the yard. Also on the west side was the sack manufacturer. On the north side, on the right as you entered the gates, was the Worker's Club. On the south side were three artisan's dwellings converted from older buildings. On the left of the entrance were terraced cottages occupied by cigarette makers and tailors.

Stride's body was discovered about 10-15 feet along the northern side of the yard, just before the door of the club, in front of a cellar ventilation grate.

A report in the Pall Mall Gazette describes the site:

The selfsame Sunday morn that heralded the discovery of the Mitre Square victim as the one that found another unfortunate lying in the gateway in Berner Street, St George's East, with her throat cut. It is true that since that time the gateway has been religiously closed after the last van has entered it. But then the vans are sometimes very late in arriving, and what is there to prevent a murderer decoying another victim there? When you push open the gate it is as dark as Erebus; when the gate is pushed back there is an effectual screen from any prying passer by, although passers by, who are constituted very largely of the foreigners who reside in the locality, are far too scared to ever peep inside that gate with its terrible history; and, finally, there is always singing or some other form of entertainment going on at the International Club next door to effectually drown a faint shriek. But what about the policeman on the beat, you say? The police on that beat have got so tired of opening that gate and finding nothing there since the murder that they have long ago despaired of ever finding anything, and consequently pass it now with the most complete indifference. And, even should, by the most remote possibility, the murderer be disturbed by anybody opening the gate from the street entrance, he is by no means caught in a trap, for there are plenty of backyards that can be scaled, and a great many courts and passages, leading to Berner and other streets, to be easily reached. On the whole, then, that gateway in Berner Street would form a very safe place for any operations of the Ripper just now.[2]

For many years, Dutfield's Yard had only been represented photographically by the frequently-seen picture taken on April 7th 1909 (the year of demolition), showing only the entrance as seen from Berner Street. In November 2007, a photograph taken in 1900 which shows the interior of the yard came into the possession of Philip Hutchinson and was first shown at the Ripper Conference in Knoxville, Tennessee in October 2008[3].