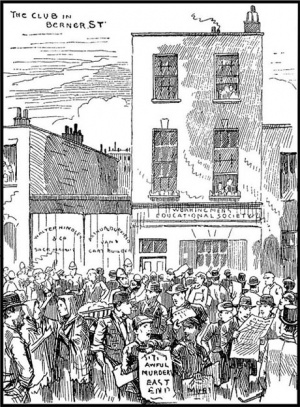 In 1884, the first radical Yiddish newspaper Der Polysher Yidl ('The Little Polish Jew') was published by Morris Winchevsky and E. W. Rabbinowitz. In 1885, radicals close to Winchevsky acquired a three-storey property at 40 Berner Street, St George-in-the-east and set up the International Working Men's Educational Club. It was attended by both Social Democrats and anarchists and was a venue for lectures on politics, economics and literature as well as plays concerts and dances. Strikes, rallies and marches were also planned here. William Morris, one of the few English to sympathise with the socialsts, spoke here often.

In 1886, the club took over the publication of Yiddish newspaper Der Arbeter Fraint ('Worker's Friend') and set up a printing office at the rear in Dutfield's Yard; the editor was Philip Krantz and William West was overseer of the printing, as well as secretary of the club itself.

It was considered a favoured centre for immigrant anarchists, though it was frowned upon by more orthodox Jews who felt that the members were unruly and showed the local Jewry in a poor light[1]. Many members used it for socialising as much as polical meetings. A description of the club (published in 1891) literally bristles with the passion of the political:

They ascended the narrow stairs to the hall, which was completely packed with people. It was of medium size and held hardly more than a hundred and fifty persons. Plain benches without backs stretched through it crosswise and along the walls. Everywhere extreme poverty, but everywhere also the endeavour to overcome poverty. On the walls hung a number of portraits: Marx, Proudhon, Lassalle overthrowing the golden calf of capitalism; a cartoon in a black frame: "Mrs Grundy" the stingy, greedy, envious bourgeoisie, which laden with treasure of all sorts, refuses the starving the pittance of a penny...

At the front, the room was enclosed by a small stage. There Tropp was standing beside the table of the chairman. He spoke in German... Auban felt the tremendous passion flooding the meeting in hot waves from that point. Breathless, anxious not to lose a single word, they hung on the lips of the speaker. An electric thrill passed through these young people, hardly out of their teens; those women tired and crushed by the burden of their ceaseless toil; those men who, torn away from their native soil, had found each other here doubly and trebly disappointed. Rarely had Auban seen such devotion, such burning interest, such glowing enthusiasm as shone from those faces...[2]

When Elizabeth Stride's body was found in Dutfield's Yard next to the club at 1.00am, 30th September 1888, the building was sealed and all members within were questioned and searched. Club steward Louis Diemschutz had found the body and appeared at the inquest along with co-members (Morris Eagle, Joseph Lave, Philip Krantz and William West).

By 1888, cooperation between the Social Democrat and anarchist membership had deteriorated, with the latter forming their own off-shoot, the 'Knights of Labour'. In 1889, violence erupted outside the club, resulting in assaults on the police - Louis Diemschutz and Isaac Kozebrodsky were involved and duly sentenced[3].

The 'Knights of Labour' took over the club in 1891. After being evicted from the premises in 1892, the club settled with several temporary bases until 1906 when it settled in Jubilee Street, Whitechapel.

The building was subsequently used as a shop [4] and was demolished in 1909 along with neighbouring properties to make way for a LCC School (now Harry Gosling Primary).