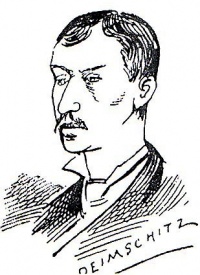 Born c.1862. A street salesman of cheap jewellery living at 40 Berner Street where he was also steward of the International Working Men's Educational Club. He lived with his wife who assisted him with the management of the club.

Diemschutz left the club at 11.30am, 29th September 1888, to go to the market at Westow Hill, Crystal Palace[1]. He returned at 1.00am the following morning to deposit his unsold goods at the club before stabling his pony at George Yard[2], Cable Street. He drove his pony and cart into Dutfield's Yard, noticing that both gates were wide open and that the yard was very dark. On entering, his pony shied to the left and would go no further and as he looked down, he noticed there was something lying in the yard, but was not able to distinguish what it was. He prodded the object with his whip before getting off the cart and striking a match and before the wind blew it out he was able to get sufficient light to see that it was a woman lying there.

He went straight into the club to see if his wife was there, and seeing that she was, he told her (and several others who were in the room) of his find, but said that he could not tell if the woman was drunk or dead. Getting a candle, he went back out into the yard with Isaac Kozebrodsky and Morris Eagle and was able to see that there was blood on the ground.

The three men did not touch the body, but immediately set off to find a police officer, Diemschutz and Kozebrodsky running south towards Fairclough Street and then in the direction of Grove Street, shouting for help (Eagle ran north to Commercial Road). They did not find an officer and turned back after passing Edward Spooner who joined them on their return to Dutfield's Yard[3].

In his witness testimony, Diemschutz claimed to have not noticed the position of her hands and yet in a subsequent press interview, stated that "her hands were clenched, and when the doctor opened them I saw that she had been holding grapes in one hand and sweetmeats in the other".[4]

Louis Diemschutz, along with Isaac Kozebrodsky, was arrested in March 1889 during a disturbance at the International Working Men's Club and charged with assaulting a police officer. Diemschutz was sentenced to three months' imprisonment with hard labour as well as paying £40 and producing two sureties of £20 each, to be forfeited if he failed to be of good behaviour for twelve months.[5][6]

Diemschutz was obviously a committed socialist and was listed as speaking at a club in Manchester in 1891, on the theme of the Paris Commune.[7]