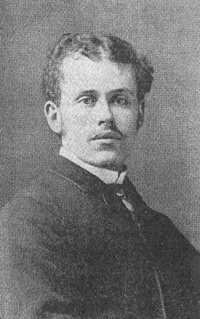 Born Woolf Wess in Vilkomar, Lithuania in 1861, son of a hasidic baker. At the age of 12, he was apprenticed to a shoemaker. He spent much of his early working life as a factory machinist in Dvinsk, but emigrated to England at the age of twenty in 1881, in order to avoid military service. He learnt English and acquired a good knowledge of English conditions.[1]

The International Working Men's Educational Club was founded in Berner Street in 1885 and Wess became club secretary, living at 2 William Street. At the inquest, he gave his occupation as printer, for he was overseer of the printing offices of Arbeter Fraint ('Worker's Friend'), based at the rear of the club in one of the dwellings on the right hand side of Dutfield's Yard.[2]

Wess was the first witness called at the Stride inquest and much of the lengthy questioning was devoted to describing Dutfield's Yard, the club, its points of access and usage, as well as Wess' own movements that night:

"William Wess [West], who affirmed instead of being sworn, was the first witness examined, and, in reply to the coroner, he said: I reside at No. 2, William-street, Cannon-street-road, and am overseer in the printing office attached to No. 40, Berner-street, Commercial-road, which premises are in the occupation of the International Working Men's Education Society, whose club is carried on there. On the ground floor of the club is a room, the door and window of which face the street. At the rear of this is the kitchen, whilst the first floor consists of a large room which is used for our meetings and entertainments, I being a member of the club. At the south side of the premises is a courtyard, to which entrance can be obtained through a double door, in one section of which is a smaller one, which is used when the larger barriers are closed. The large doors are generally closed at night, but sometimes remain open. On the left side of the yard is a house, which is divided into three tenements, and occupied, I believe, by that number of families. At the end is a store or workshop belonging to Messrs. Hindley and Co., sack manufacturers. I do not know that a way out exists there. The club premises and the printing-office occupy the entire length of the yard on the right side. Returning to the club-house, the front room on the ground floor is used for meals. In the kitchen is a window which faces the door opening into the yard. The intervening passage is illuminated by means of a fanlight over the door. The printing-office, which does not communicate with the club, consists of two rooms, one for compositors and the other for the editor. On Saturday the compositors finished their labours at two o'clock in the afternoon. The editor concluded earlier, but remained at the place until the discovery of the murder.

How many members are there in the club? - From seventy-five to eighty. Working men of any nationality can join.

Is any political qualification required of members? - It is a political - a Socialist - club.

Do the members have to agree with any particular principles? - A candidate is proposed by one member and seconded by another, and a member would not nominate a candidate unless he knew that he was a supporter of Socialist principles. On Saturday last I was in the printing-office during the day and in the club during the evening. From nine to half-past ten at night I was away seeing an English friend home, but I was in the club again till a quarter-past midnight. A discussion was proceeding in the lecture-room, which has three windows overlooking the courtyard. From ninety to 100 persons attended the discussion, which terminated soon after half-past eleven, when the bulk of the members left, using the street door, the most convenient exit. From twenty to thirty members remained, some staying in the lecture-room and the others going downstairs. Of those upstairs a few continued the discussion, while the rest were singing. The windows of the lecture-room were partly open.

How do you know that you finally left at a quarter-past twelve o'clock? - Because of the time when I reached my lodgings. Before leaving I went into the yard, and thence to the printing-office, in order to leave some literature there, and on returning to the yard I observed that the double door at the entrance was open. There is no lamp in the yard, and none of the street lamps light it, so that the yard is only lit by the lights through the windows at the side of the club and of the tenements opposite. As to the tenements, I only observed lights in two first-floor windows. There was also a light in the printing-office, the editor being in his room reading.

Was there much noise in the club? - Not exactly much noise; but I could hear the singing when I was in the yard.

Did you look towards the yard gates? - Not so much to the gates as to the ground, but nothing unusual attracted my attention.

Can you say that there was no object on the ground? - I could not say that.

Do you think it possible that anything can have been there without your observing it? - It was dark, and I am a little shortsighted, so that it is possible. The distance from the gates to the kitchen door is 18 ft.

What made you look towards the gates at all? - Simply because they were open. I went into the club, and called my brother, and we left together by the front door.

On leaving did you see anybody as you passed the yard? - No.

Or did you meet any one in the street? - Not that I recollect. I generally go home between twelve and one o'clock.

Do low women frequent Berner-street? - I have seen men and women standing about and talking to each other in Fairclough-street.

But have you observed them nearer the club? - No.

Or in the club yard? - I did once, at eleven o'clock at night, about a year ago. They were chatting near the gates. That is the only time I have noticed such a thing, nor have I heard of it."[3]

Wess was active in the Hackney branch of the Socialist League and acted as secretary of the strike committee during the strike of East London tailors in 1889. From 1889 he was reponsible for the typesetting of the Freedom newspaper and he became manager of the Freedom office in 1891, when he was recorded as living at 108 Brady Street Dwellings, Brady Street with relatives[4]. He became the editor of Arbeiter Fraint in 1895.

He was also secretary successively of the International Tailors, Machinists and Pressers' Trade Union, and the United Ladies and Mantle Makers' Association. Withdrawing from his activities in the Jewish trade union movement at the beginning of the twentieth century, he took up employment as a book-keeper in a tobacco factory, joined the Labour Party in the 1930s and was involved in Spanish solidarity work in 1936.

A catalogue of the papers of William Wess