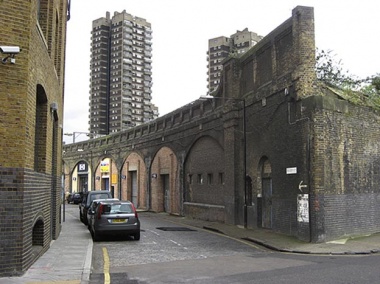 Pinchin Street from Back Church Lane, 2008. The arch where the torso was discovered is first on the right.

Thoroughfare running east-west from Christian Street to Back Church Lane. Originally known as Rope Walk[1], its north side was lined with run-down houses and the south side was made up of arches beneath the Great Eastern Railway(1840). Before the construction of a line terminating at warehouses to the north, Pinchin Street was connected to Back Church Lane by the narrow Blacksmith's Arms Yard[2]

In Pinchin-street, down in St. George’s East, is an ordinary railway arch, 14ft. or 15ft. above the level of the ground, over which is laid the main line of the Great Eastern Railway from Fenchurch-street eastwards. Close by is a branch leading to the huge warehouses constructed by the London and Tilbury Company in Commercial-road, the erection of which necessitated the clearing a large extent of ground of the small and dilapidated buildings which formerly encumbered it. Like most parts of the district lying between Whitechapel and the notorious old Ratcliff Highway, Leman-street and neighbourhood are densely crowded, a large proportion of the inhabitants being Germans, Poles, and Russians, who follow the pursuits of tailoring and bootmaking, polish walking sticks, hawk pictures, and engage in various callings of a similar kind requiring no great physical exertion. The whole district is squalid. No one would be a bit the worse if, by some other great public works, half of it were cleared altogether.[3]

At 5.15am, 10th September 1889, PC William Pennett discovered a female torso under the railway arch closest to Back Church Lane. It was covered by an old chemise and the body, missing both head and legs, was already heavily decomposed.

PC Pennett also found Michael Keating and Richard Hawke under some arches further down the street and they were promptly taken into custody.

The north side is now quite open and consists mainly of 1950s housing, built after the area was heavily damaged during the Second World War[4]. Although the railway itself is disused, the arches still remain, with many of them in use as garages and lock-ups. The arch where the torso was found has been bricked up, although small windows suggest it has been (or still is) used for business purposes.