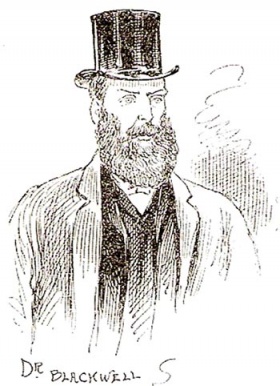 Dr. Blackwell was the first doctor called to the scene of the Elizabeth Stride murder. PC Edward Collins had rushed to his offices at 100 Commercial Road to notify him of the discovery. The constable instead met Edward Johnston, Blackwell's assistant. Johnston relayed the news to Blackwell, who was sleeping at the time, and then immediately followed PC Collins back to Berner Street. Blackwell arrived at the scene shortly afterwards at precisely 1.16am.

The doctor pronounced Stride dead, and calculated that she could not have been killed more than twenty minutes before as the body was still quite warm. The next day The Star published a statement Dr. Blackwell had made to the press:

"At about ten minutes past one I was called to 40, Berner-street by a policeman, where I found a woman who had been murdered. Her head had been almost severed from her body. She could not have been dead more than twenty minutes, the body being perfectly warm. The woman did not appear to be a Jewess, but more like an Irishwoman. I roughly examined her, and found no other injuries, but this I cannot definitely state until I have made a further investigation of the body. She had on a black velvet jacket and black dress of different material. In her hand she held a box of cachous, whilst pinned in her dress was a flower. I should say that as the woman had held sweets in her left hand that her head was dragged back by means of a silk handkerchief she wore round her neck, and her throat was then cut. One of her hands, too, was smeared with blood, so she may have used this in her rapid struggle. I have no doubt that, the woman's windpipe being completely cut through, she was unable to make any sound. I might say it does not follow that the murderer would be bespattered with blood, for as he is sufficiently cunning in other things he could contrive to avoid coming in contact with the blood by reaching well forward."[3]

Dr. Blackwell assisted Dr. George Bagster Phillips with the post-mortem examination at approximately 3.00pm on 1 October. Blackwell performed the dissection while Dr. Phillips took notation. He testified at the Stride inquest the next day:

Mr. Frederick William Blackwell deposed: I reside at No. 100, Commercial-road, and am a physician and surgeon. On Sunday morning last, at ten minutes past one o'clock, I was called to Berner-street by a policeman. My assistant, Mr. Johnston, went back with the constable, and I followed immediately I was dressed. I consulted my watch on my arrival, and it was 1.16 a.m. The deceased was lying on her left side obliquely across the passage, her face looking towards the right wall. Her legs were drawn up, her feet close against the wall of the right side of the passage. Her head was resting beyond the carriage-wheel rut, the neck lying over the rut. Her feet were three yards from the gateway. Her dress was unfastened at the neck. The neck and chest were quite warm, as were also the legs, and the face was slightly warm. The hands were cold. The right hand was open and on the chest, and was smeared with blood. The left hand, lying on the ground, was partially closed, and contained a small packet of cachous wrapped in tissue paper. There were no rings, nor marks of rings, on her hands. The appearance of the face was quite placid. The mouth was slightly open. The deceased had round her neck a check silk scarf, the bow of which was turned to the left and pulled very tight. In the neck there was a long incision which exactly corresponded with the lower border of the scarf. The border was slightly frayed, as if by a sharp knife. The incision in the neck commenced on the left side, 2 inches below the angle of the jaw, and almost in a direct line with it, nearly severing the vessels on that side, cutting the windpipe completely in two, and terminating on the opposite side 1 inch below the angle of the right jaw, but without severing the vessels on that side. I could not ascertain whether the bloody hand had been moved. The blood was running down the gutter into the drain in the opposite direction from the feet. There was about 1lb of clotted blood close by the body, and a stream all the way from there to the back door of the club.

[Coroner] Were there no spots of blood about? - No; only some marks of blood which had been trodden in.

[Coroner] Was there any blood on the soles of the deceased's boots? - No.

[Coroner] No splashing of blood on the wall? - No, it was very dark, and what I saw was by the aid of a policeman's lantern. I have not examined the place since. I examined the clothes, but found no blood on any part of them. The bonnet of the deceased was lying on the ground a few inches from the head. Her dress was unbuttoned at the top.

[Coroner] Did you form any opinion as to how long the deceased had been dead? - From twenty minutes to half an hour when I arrived. The clothes were not wet with rain. She would have bled to death comparatively slowly on account of vessels on one side only of the neck being cut and the artery not completely severed.

[Coroner] After the infliction of the injuries was there any possibility of any cry being uttered by the deceased? - None whatever. Dr. Phillips came about twenty minutes to half an hour after my arrival. The double doors of the yard were closed when I arrived, so that the previous witness must have made a mistake on that point.

A Juror: Can you say whether the throat was cut before or after the deceased fell to the ground? - I formed the opinion that the murderer probably caught hold of the silk scarf, which was tight and knotted, and pulled the deceased backwards, cutting her throat in that way. The throat might have been cut as she was falling, or when she was on the ground. The blood would have spurted about if the act had been committed while she was standing up.

The Coroner: Was the silk scarf tight enough to prevent her calling out? - I could not say that.

[Coroner] A hand might have been put on her nose and mouth? - Yes, and the cut on the throat was probably instantaneous. [4]

Dr. Blackwell was recalled again to the inquest on 5 October, after a re-examination of the body had been performed by him and Dr. Phillips:

Dr. Blackwell [recalled] (who assisted in making the post-mortem examination) said: I can confirm Dr. Phillips as to the appearances at the mortuary. I may add that I removed the cachous from the left hand of the deceased, which was nearly open. The packet was lodged between the thumb and the first finger, and was partially hidden from view. It was I who spilt them in removing them from the hand. My impression is that the hand gradually relaxed while the woman was dying, she dying in a fainting condition from the loss of blood. I do not think that I made myself quite clear as to whether it was possible for this to have been a case of suicide. What I meant to say was that, taking all the facts into consideration, more especially the absence of any instrument in the hand, it was impossible to have been a suicide. I have myself seen many equally severe wounds self-inflicted. With respect to the knife which was found, I should like to say that I concur with Dr. Phillips in his opinion that, although it might possibly have inflicted the injury, it is an extremely unlikely instrument to have been used. It appears to me that a murderer, in using a round-pointed instrument, would seriously handicap himself, as he would be only able to use it in one particular way. I am told that slaughterers always use a sharp- pointed instrument.

The Coroner: No one has suggested that this crime was committed by a slaughterer. - Witness: I simply intended to point out the inconvenience that might arise from using a blunt-pointed weapon.

The Foreman: Did you notice any marks or bruises about the shoulders? - They were what we call pressure marks. At first they were very obscure, but subsequently they became very evident. They were not what are ordinarily called bruises; neither is there any abrasion. Each shoulder was about equally marked.

A Juror: How recently might the marks have been caused? - That is rather difficult to say.