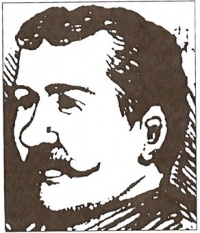 Brother of Annie Chapman and witness at her inquest.

At the time of the inquest he was employed as a stationer (printer's warehouseman) and was renting a ground-floor furnished room at his mother's house at 29 Montpelier Place, Knightsbridge, for 6s per week. Described as a tall man with dark hair and a heavy brown moustache. He identified the body in the mortuary and said he had seen Annie in Commercial Road a while before her murder, but did not know where she was living, nor did he have any knowledge of her associates. He gave her 2s.[1]

In October 1888, he was sacked from his warehouse job for drinking and thieving. Friends managed to find him a job in Oxford Street, London W, but after only a month he had started to drink again and stole some money from his employers and left his wife and children. He eventually gave himself up to police in Gloucester - when tried at Marlborough Street Court, he blamed drink on his misdemeanours and was sentenced to three months hard labour at Millbank Prison. In a report dated 19th October 1888[2], Chief Inspector Donald Swanson gives Smith's address as 44 Bartholomew Close, EC.

One assumes that the family were reunited and one of Fountain's four children, George, is recorded as being born in America c.1891, although by 1901, the family had returned to England and were living at 6 Reporton Road, Fulham. Another son, Howard, was an engineer and lived in Bothwell Street, Hammersmith.[3]

He died on 24th October 1933 at Radcliffe Infirmary, Oxford; the cause was acute intestinal obstruction (strangled inguinal hernia).