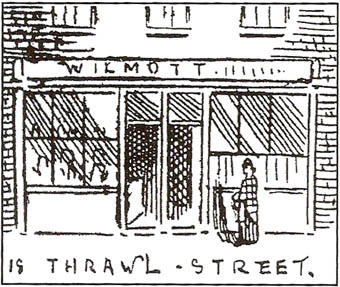 Common lodging house situated at 18 Thrawl Street, Spitalfields. First registered on 12th May 1852 when it was owned by Patrick Henley, George Willmott took over in November 1863 for a mere three years. He also acquired lodging houses at Nos. 11-15 Thrawl Street. He then took ownership of No.18 again in 1870 but passed it on to Joseph Davies two years later, although he kept his other properties until 1891. A modest-sized house (by comparison with other such places in the area), Wilmott's was registered to hold approximately 70 residents. The owner in 1888 was actually Alfred Wood[1] , although the name 'Wilmott's' was obviously retained for many years thereafter.[2]

Mary Ann Nichols had lodged at Wilmott's from 2nd to 24th August 1888, where apparently for 4d she shared a 'surprisingly clean' room with three other women. She also shared a bed with Emily Holland[3]. At 2.30am on the morning of her death, 31st August 1888, an inebriated Nichols met Holland who tried to convince her to return to the lodging house.[4]

According to a report by Sergeant Timm Kuhrt, Frances Coles was living at Wilmott's in July 1889.[5]

Wilmott's may have survived the redevelopment of the eastern end of Thrawl Street in the early 20th century - Keate House was built on the south-east corner with George Street in 1908[6], on the site of lodging houses at 16 & 17 Thrawl Street and No.18 appears to have been converted by two smaller properties, listed as 18 and 18A.[7]

That said, it did not survive the redevelopments of the 1970s.