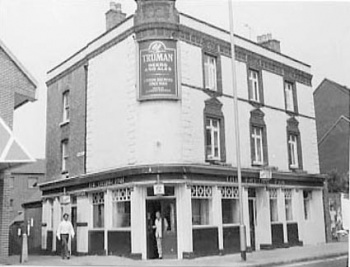 The former Frying Pan stands on the northern corner of Brick Lane and Thrawl Street. Although the current building dates from 1891, records show that the pub itself goes back to at least 1811 when the owner was an Ann Pybus of 22 Red Lion Street Spitalfields[1]. It was known for its clientele of prostitutes during the 19th and early 20th centuries and was a Truman's house.The landlord in 1888 was William Farrow.[2]

Mary Ann Nichols was allegedly seen leaving the pub at 12.30am on the 31st August 1888[3]one of the last times she was seen alive. It may well have been here where she spent her doss-money which she later claimed (to Emily Holland) she had made three times that day.[4]

The pub closed down in 1991 and was swiftly converted into a balti restaurant, 'The Sheraz', but the original name can still be seen in the terracotta relief design at the top of the building. The restaurant also offers newly refurbished (2010) bed and breakfast accommodation in its upstairs rooms.