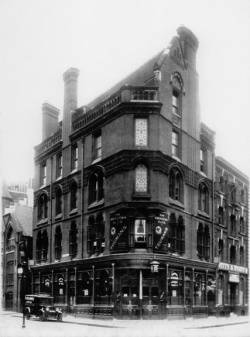 The original pub was built in 1850 following the construction of Commercial Street, though the current premises date from 1883/4. It was designated as being at No.51 in 1871. Originally a four to five-storey building, the landlord in 1888 was Arthur Ferrar and it was a Truman's house.[1]

The pub was allegedly frequented by 'Leather Apron'. A reporter with The Star was directed to the Princess Alice by two women who claimed it was the most likely place to find him, adding "that it would be necessary to look into the shadows, as if he was there he would surely be out of sight".[2]

James Sadler went to the Princess Alice between 8.30 and 9.00pm, 11th February 1888 after being discharged from the SS Fez and there met Frances Coles. He had met her in the same pub eighteen months previously and had spent the night with her in a Thrawl Street lodging house. Coles suggested they leave the pub as she did have a little money and that when this was the case, other customers would expect her to buy drinks.[3]

Long-standing managers Alfie and Hetty ran the pub from 1935 until the 1960s and were given a warm review in Truman's company magazine in 1960:

Mr and Mrs A Harris, or as they are better known, Alfie and Hetty, have been at the Princess Alice, Commercial Street, Whitechapel for 25 years. After the first world war, Alfie worked as a tailor until he joined the Licensed Trade in the West End, Moving East to the Princess Alice in August 1935. There is no lack of Licensed Trade experience in the family as Alfie and Hetty have a son and daughter, the son helping in the bar at weekends. One of the favourite topics of the customers at the "Alice" is football, as Alfie is a keen supporter of Chelsea FC and has held a season ticket for forty years.

The "Alice" is well known to all the market folk by virtue of its position so near to these famous market streets. They are well known for their cheerfulness and willingness to please, there being no better indication than during the last war from 1939-45 when the "Princess Alice" never closed, although bombs were dropping all around, and on one occasion the premises next door 'brewing' up after a fall of incendiary bombs. There is no doubt Alfie is a character and he has a motto 'Whatever you want, I've got it', and what he has in his store room we are told has to be seen to be believed![4]

Some time after 1938, the Princess Alice lost the top two floors, possibly as the result of the bombing mentioned in the above article. In 1986 it was renamed 'The City Darts' and became a Thorley Tavern. It was refurbished and reverted to its original name in 2005.

The upstairs bar of 'The Alice' was (until 2007) a regular venue for meetings of the Whitechapel Society 1888 and Fiona Rule's book about Dorset Street, The Worst Street in London, was launched here in September 2008. It is one of the more down-to-earth pubs on Commercial Street and still sells kosher food as part of its bar meals.