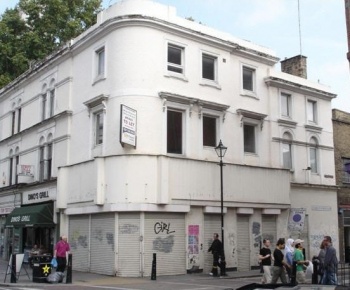 Situated on the northern corner with Fashion Street (actual address was Fashion Street before the construction of Commercial Street)[1]; the landlord in 1888 was Richard Dipple.[2]

In 1849, the Commissioners of the (Metropolitan) Association for Improving the Dwellings of the Industrious Classes were concerned at the ’very unsightly appearance’ of a pub on the northern corner of Fashion Street and Commercial Street, believing it to be 'detrimental to the property acquired by us’. It was sold to the owner of a strip of land bordering the street on condition that he pulled down the premises and an adjoining house and replace them with five properties using designs approved by the Commissioners. It is likely that the surviving building was constructed at this time.[3]

According to witness Charles Preston, Elizabeth Stride was arrested at the Queen's Head for drunk and disorderly behaviour one saturday night, and was released on bail the next day. Stride was also seen there by lodging house deputy Elizabeth Tanner at 6.30pm, 29th September 1888[4].

At approximately 2.00pm on the morning of Mary Jane Kelly's murder, witness George Hutchinson stood under the lamp of the pub to get a good look at the man Kelly had just met as the couple passed him.[5]

The Queen's Head stopped trading as a public house in 1927 and became a confectioners[6]. In the 1960s-70s it was Banco de Bilbao before becoming a retail premises. The building is currently vacant (2009).