London E1 - Area within the Borough of Tower Hamlets, bordered by the City of London (to the west), Shoreditch (north), Mile End New Town (east) and St Mary Whitechapel (south). 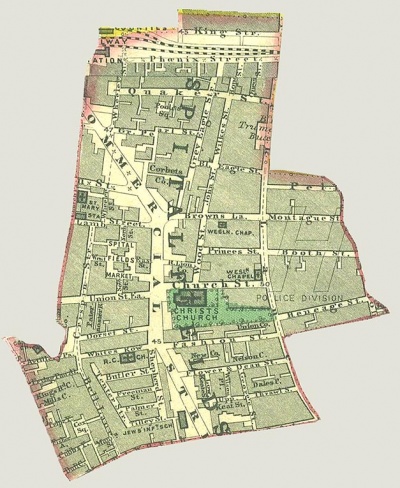 Originally the site of a Roman burial ground which was later covered by the 'New Hospital of St Mary without Bishopgate', founded in 1197 by Walter Brune and his wife Roisia. The name Spitalfields is a contraction of 'hospital fields'. The earliest developments in the western area of the district date from this time and the land to the east was predominantly rural, including the large Lolesworth Field. The famous Spitalfields Market was granted its charter by Charles II in 1682.

Building proceeded slowly and only stretched as far east as Brick Lane by the mid-17th century. Considerable development ensued after the arrival of the French Huguenot silk weavers following the revocation of the Edict of Nantes in the latter part of that century. Many streets were laid out as well as gardens and orchards, followed by the construction of handsome houses in the 1700s. Spitalfields was originally part of Stepney and did not have a nucleus of its own until 1729 following the construction of Hawksmoor's Christ Church.

The late 18th and early 19th centuries saw a great deal of development, resulting in the creation of many overcrowded slum districts. Much of this was exacerbated by the decline in the local silk-weaving trades which resulted in many abandoned properties being sublet. Commercial Street was built as an attempt to wipe out these notorious areas in the 1850s, although the plan effectively failed, causing considerable overcrowding in the surviving surrounding neighbourhoods.

By the late 1880s, Spitalfields (along with other East End districts) had become an area of settlement for eastern-European Jewish refugees, dominating the local population well into the 20th century. Many took up tailoring and boot-making trades.

The murders of Annie Chapman and Mary Jane Kelly occured in Spitalfields as did the attack on Annie Farmer. Although the exact location of her attack is unknown, Annie Millwood returned injured to her lodging house in White's Row (Spitalfields Chambers). Emma Elizabeth Smith's attack appeared to take place in Whitechapel, however she later managed to get to lodging house in George Street, Spitalfields.

Following the Whitechapel Murders, slum clearance scemes which had begun in the 1870s were given a new impetus, resulting in the redevelopment of its most notorious thoroughfares. Spitalfields Market was also extended in the 1920s and 1930s. The area, however, was still poor and new slums replaced the old. Jewish communities began to leave after the Second World War, replaced by new immigrants from Bangladesh as the 1960s began and the Asian settlers immediately settled into the clothing and textile trades left behind by their predecessors.

From the 1970s onwards, developers began buying the former silk-weavers' homes and renovated them, a trend which reached its peak in the 1990s. Also by this time, Spitalfields Market and the Black Eagle Brewery had closed down and were revamped as attractive places for leisure and tourism; the Spitalfields section of Brick Lane had also seen a major increase in Bengali restaurants, earning it the title of 'Banglatown'.

Spitalfields today is considered to be a popular, vibrant place and new office developments on its western side suggest that the City is beginning to encroach upon this once neglected part of London. It is also a focal point for numerous Jack the Ripper and East End guided walks.

Relevant streets and locations in Spitalfields:

East End: Then and Now, Winston G Ramsay (After the Battle 1996)