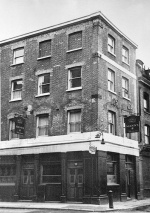 The Prince Albert was situated on the north side of Brushfield Street at the western corner with Steward Street. In 1888 the proprietor was Samuel Fiddymont and it was known locally as 'the clean house'. It was a Mann's house.

It was here where Mrs. Fiddymont and Mary Chappell saw a suspicious and alarming looking man at 7am, 8th September 1888[1]. He bought a drink and left after downing it in one gulp. Chappell followed him outside where she pointed him out to Joseph Taylor.[2]

The pub was probably demolished sometime in the 1960s.