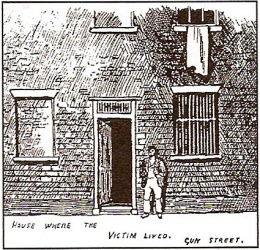 Common Lodging House situated in Gun Street, Spitalfields on the west side close to the junction with Artillery Street (now Artillery Lane). Variously described as being at No.52 or No.54, it was in fact a large establishment that consisted of four joined properties, Nos. 50, 51, 52 and 53. No.50 was first registered in July 1854 (originally by James Sainsbury), No.51 in February 1879 and Nos. 52 & 53 in April 1880. The collective houses were licensed for a total of 198 residents[1].

The owner was Thomas Tempany (b.1830, Cambridgeshire), a lodging house keeper formerly of 6 Paternoster Row (part of today's Brushfield Street)[2]. In 1881 he was residing at 161 Bishopsgate and ten years later with his wife Sarah, eight children and a step-daughter at 6-8 Widegate Street[3]. His name has also been spelt 'Tenpany' and 'Tampany'.

In 1889, the lodging house deputy was Elizabeth Ryder.

Alice McKenzie and John McCormack had been living at 'Mr. Tenpenny's' on-and-off from about July 1888. On 16th July 1889, McCormack had returned to the lodging house after a day's work, giving McKenzie some money before he went to sleep. This was the last time he saw her alive.[4].

Mr Tempany shared the funeral expenses with the proprietor of of 'The Tower' public house in Artillery Street (where the funeral procession started), having declined to accept an offer from the London Evangelization Society and Common Lodging-house Mission to defray the cost of the funeral.[5]

Thomas Tempany gave up ownership of the lodging houses in March 1894.[6]

The site of the lodging house was cleared in the early 1970s and a modern building erected on the site by the middle of that decade[7].