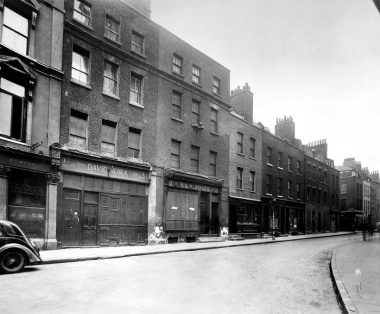 The last street to be laid out on the Wood-Mitchell estate (which also included Princelet, Hanbury and Wilkes Streets), building began with the south side in 1726 as Christ Church was being built. Early depictions of the street[1] reveal that its western end, the junction with Red Lion Street, was rather obstructed, which no doubt contributed to its desirability as a residential thoroughfare, especially since the properties on the south side are considered to be the finest on the estate.

The building leases on several houses featured a restrictive covenant respecting its use for noxious trades, however silk-weaving and worsted-dying were not included and many of the properties became occupied (usually in part) by firms connected with the silk industry, some as early as 1743.

The rectory of Christ Church at No.1 Church Street (now 2 Fournier Street) was designed by Nicholas Hawksmoor and John James and was built in 1726-9[2]. The street's most famous building is the Neuve Eglise (formerly 39 Church Street), built c.1743 as a French church. It subsequently became a methodist chapel (1809), the Spitalfields Great Synagogue (1897) and since 1976 has been the Jamme Masjid Mosque.

The Ten Bells pub, situated at the northern corner with Commercial Street, was originally designated 33 Church Street. At 31 Church Street was Jones' pawnbrokers where Catherine Eddowes pawned a pair of John Kelly's boots on 28th September 1888, whilst Kelly stood outside[3]. This property is now 3 Fournier Street and Jones' sign above the front has been uncovered and renovated. The sign above No.1 ('David Kira')has also been restored from an earlier age.

Church Street was originally going to be renamed Christabel Street in July 1893 but was eventually renamed Fournier Street on 7th November 1893[4] after George Fournier, a wealthy local benefactor of Huguenot origin. Many other streets in the area were renamed at this time[5].

Much of Fournier Street fell into disrepair in the latter half of the 20th century, with many properties being used as sweatshops or storage spaces for materials or even fruit and vegetables for the nearby market. Following the endeavours of the Spitalfields Trust in renovating potentially condemned local houses of this type in the late 1970s, Fournier Street began to be a focus of the group's continuing campaign.

No.12 is the home of artists Gilbert and George, who have lived there since 1968. For many years they were regulars at the Market Cafe (No.5) until its closure in September 2000[6]. Fournier Street is also home to controversial artist Tracey Emin.