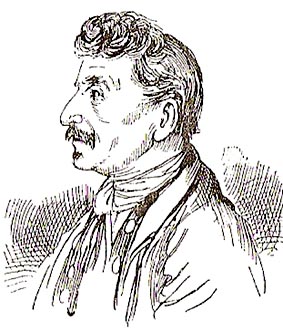 Witness at Catherine Eddowes' inquest and her lover at the the time of her death.

A labourer who also jobbed round the markets, he had been mainly in the employ of a fruit salesman called Lander for over twelve years[1]. A resident of Cooney's Lodging House (also known as Smith's) at 55 Flower and Dean Street from 1881, it was here where he became acquainted with Catherine Eddowes[2]during that year, knowing her as Catherine Conway. He never knew of her going out for immoral purposes and stated that he would not allow her to do so. He was described in 1888 as 'quiet and inoffensive' with fine features and 'sharp intelligent eyes', but it was also apparent that he was quite ill, suffering from kidney trouble and a bad cough[3].

Kelly and Eddowes had returned from hopping on Thursday 28th September and spent the night at the casual ward in Shoe Lane. The next day, Catherine pawned Kelly's boots at Jones' pawnbrokers, 31 Church Street, receiving 2s 6d[4] . The couple did not sleep together on the Friday night (28th September) as Catherine had gone to the casual ward at Mile End and Kelly stayed alone at Cooney's. They met again at 8.00am the following morning and bought food and drink from the proceeds of Kelly's boots.

John Kelly had last seen Catherine on Saturday 29th September 1888 at about 2.00pm in Houndsditch, where they parted on good terms. Catherine said she was going to Bermondsey to see her daughter, promising to be back by 4.00pm and no later. When she did not return, Kelly did not enquire about her as he was used to her returning to the lodging house at around 8.00-9.00pm. He later heard from two women that she had been locked up at Bishopsgate Police Station for having 'a little drop of drink'. He knew that she had the habit of occasionally drinking to excess, but stated that she had no money on her when they parted company that day.[5]

He did not suspect that the latest victim of the Whitechapel murderer was Eddowes until he read of the pawn ticket found by the body under the name of Birrel, upon which he presented himself to the police and subsequently identified the body[6]. He also attended Catherine's funeral on 8th October 1888.

John Kelly was admitted to Whitechapel Workhouse Infirmary on 29th November 1888, suffering from laryngitis, which is believed to be the last record of him[7].