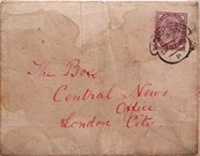 The envelope which contained the 'Dear Boss' letter.

Commonly used name for a letter sent to the Central News Agency, 5 New Bridge Street, London EC, in September 1888 which claimed to be from the Whitechapel Murderer. Dated 25th September, it arrived at the News Agency offices on 27th September. It was written in red ink, covering both sides of the paper and was followed by a post-script written in red pencil/crayon. The envelope was addressed to 'The Boss, Central News Office, London City', was postmarked 'SP 27 88' and was posted from 'London EC'. 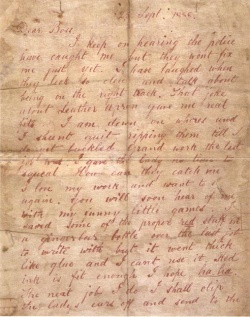 Front of the 'Dear Boss' letter.

I keep on hearing the police have caught me but they wont fix me just yet. I have laughed when they look so clever and talk about being on the right track. That joke about Leather Apron gave me real fits. I am down on whores and I shant quit ripping them till I do get buckled. Grand work the last job was. I gave the lady no time to squeal. How can they catch me now. I love my work and want to start again. You will soon hear of me with my funny little games. I saved some of the proper red stuff in a ginger beer bottle over the last job to write with but it went thick like glue and I cant use it. Red ink is fit enough I hope ha. ha. The next job I do I shall clip the ladys ears off and send to the police officers just for jolly wouldn't you. Keep this letter back till I do a bit more work, then give it out straight. My knife's so nice and sharp I want to get to work right away if I get a chance. Good Luck.

PS Wasnt good enough to post this before I got all the red ink off my hands curse it No luck yet. They say I'm a doctor now. ha ha

[The postscript was written at right angles to the main body of the text.][1] 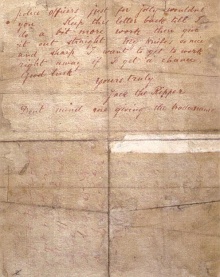 Reverse of the 'Dear Boss' letter.

The letter was not the first missive claiming to be from the killer (a letter dated 24th Sept was received earlier by Sir Charles Warren - see 24 September Letter). It was initially treated as a joke, but was passed on to Scotland Yard on 29th September with a covering note from Thomas Bulling of the Central News Agency:

The editor presents his compliments to Mr. Williamson & begs to inform him the enclosed was sent the Central News two days ago, & was treated as a joke.[2]

On 1st October 1888, the day after the murders of Elizabeth Stride and Catherine Eddowes, the Daily Telegraph published a transcription of the letter[3]. The same day, the Central News Agency received a postcard which refered to both the double murder and the 'Dear Boss' letter - see Saucy Jacky Postcard for further details). The fact that the letter mentioned clipping the next victim's ears off and that Catherine Eddowes' ear had been cut may have given some impetus to the need to give the letter some careful consideration:

It was of course treated as the work of a practical joker, but it is singular to note that the latest murders have been committed within a few days of the receipt of the letter; that apparently in the case of the last victim the murderer made an attempt to cut off the ears...[4].

A facsimile of the letter was first published in the Evening News of 4th October 1888 (though it may well have appeared in late editions of the previous day's paper)[5], and thus the letter was made truly public. The letter is thus credited with the creation of the enduring soubriquet 'Jack the Ripper'.

Despite being generally accepted as containing the first use of the name 'Jack the Ripper'[6], opinion on its veracity weighs heavily in favour of it being a contemporary hoax, most likely written by a journalist. Robert Anderson believed this to be the case, stating so in his memoirs[7] as did Melville Macnaghten:

This document was sent to Scotland Yard, and (in my opinion most unwisely) was reproduced, and copies of same affixed to various police stations, thus giving it an official imprimatur. In this ghastly production I have always thought I could discern the stained forefinger of the journalist indeed, a year later, I had shrewd suspicions as to the actual author! But whoever did pen the gruesome stuff, it is certain to my mind that it was not the mad miscreant who had committed the murders. The name " Jack the Ripper," however, had got abroad in the land and had " caught on " ; it riveted the attention of the classes as well as the masses.[8]

The identity of the alleged journalist author has often focused on an individual known for many years only as 'Best' whose culpability for writing the 'Dear Boss' letter was brought to the public attention in 1966[9]. In 2009, Dr. Andrew Cook publicly identified him as Frederick Best[10] and a television documentary tie-in covered the journalistic aspects of the Ripper case (including Best's alleged involvement with creating the name)[11].

Thomas Bulling himself has also been accused of being the creator. This information was brought to light by the discovery of the Littlechild Letter in 1993[12] which stated that:

With regard to the term 'Jack the Ripper' it was generally believed at the Yard that Tom Bullen [sic] of the Central News was the originator, but it is probable Moore, who was his chief, was the inventor. It was a smart piece of journalistic work. No journalist of my time got such privileges from Scotland Yard as Bullen.

According to an American newspaper report of April 1891, the letter was written by John Moore, the General Manager of Central News, in order to generate publicity for his agency. The report claimed that his friends observed that the communications (described as "postal cards") did not surprise him as much they they might have done, and that the handwriting of the letter resembled Moore's. This allegation was attributed to a Mr Brisbane, "who was a London journalist at the time of some of the atrocious Whitechapel murders". [13]

It has also been noted that a journalist would be more likely to send such a communication to the Central News Agency (a press organisation not necessarily recognised by the wider public) as opposed to a specific newspaper or the police. Despite this, the observation has also been made regarding the use of 'Americanisms' such as 'Boss', 'Fix', 'Down on' and 'buckled'.

The handwriting appears to be the same as that on the Saucy Jacky Postcard and the threatening 6 October Letter. 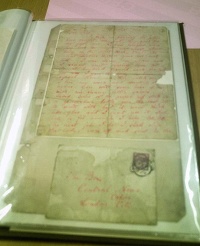 The Dear Boss letter and envelope as stored at the National Archives, Kew, 2006 (J Bennett).

The 'Dear Boss' letter had apparently gone missing from the official files by 1928. It was later believed to be in the possession of Gerald Donner, the grandson of Melville Macnaghten and was seen at his home by Philip Loftus in 1950[14]. After Donner's death, the letter went missing again but was sent anonymously to Scotland Yard in a brown envelope (posted from Croydon) in November 1987. The letter was accompanied by other material including Bulling's covering note, the envelope, Thomas Bond's post-mortem report on Mary Jane Kelly and documents relating to other criminal cases[15]. The Ripper-related documents were subsequently placed in the Public Record Office (now the National Archives) in Kew where they are in file MEPO 3/3153. Public access is limited owing to the 'iconic' status of the original Whitechapel Murders files and ephemera. It was displayed at the 'Jack the Ripper and the East End' exhibition, held at the Museum in Docklands between May and November 2008 and has occasionally been displayed at other events.

The letter is in poor condition - there is a piece missing from the edge and evidence that tape has been used to repair a tear along the central fold line. The postscript is now almost illegible.

Dear Boss: Hoax as Popular Communal Narrative in the Case of the Jack the Ripper Letters, by Ted Remington, University of Iowa - Article available on Casebook.

'Why is 'Dear Boss' a hoax to you?' - Discussion thread on JTRForums.