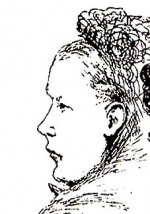 Eddowes' elder sister, born Eliza Eddowes in Wolverhampton c.1837[1]. She married butcher James Gold at St. Barnabas Church, King Square, Finsbury on 23rd January 1859. At this time they were living at 5 Rahere Street, Goswell Road. They later had one son named George (b.1867).

Eliza had been widowed by 1881 and had settled in Spitalfields, living with her son George and husband Charles Frost at 6 Thrawl Street[2]. Frost was a waterside labourer and Weslyan who sold farthing books in Liverpool Street.[3]

Eliza was the first witness called at the Eddowes inquest and gave her address as Thrawl Street. She had identified the body and recognised the dead woman as being her sister whom she had not seen for three to four weeks. She knew that she had been living with a man named Kelly at 55 Flower and Dean Street and that they would go out hawking. Eliza described her sister as being "of sober habits".

She was also able to reveal that Catherine had previously lived with a pensioner named Conway (ie Thomas Conway) for several years; she could not say whether the couple had separated on good or bad terms or indeed if Conway was still alive.

Eliza Gold's testimony was signed 'X' suggesting that she may have been illiterate[4]. She attended Catherine's funeral with other family members on 8th October 1888.

She was admitted to the Whitechapel Infirmary on 10th January 1893 with a chest infection but died the next day; cause of death was heart disease and bronchitis accelerated by alcoholism and malnutrition.[5]