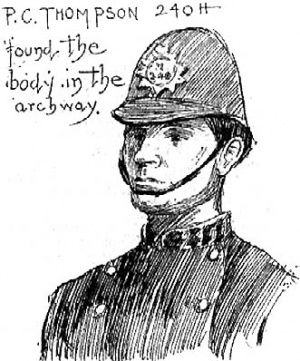 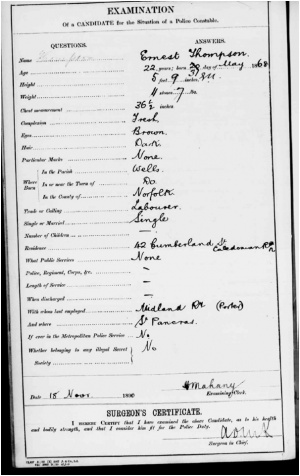 PC Thompson discovered the body of Frances Coles in Swallow Gardens - that night happened to be his first solo beat duty. He appeared on the first day of the inquest:

What time did you pass from Chamber-street to go under the arch? -

As near 2:15 as I can tell. The entrance to the arch is opposite the Catholic schools. At that time I did not know the place was known by the name of Swallow-gardens, but I have heard so since. The roadway under the arch is partially taken away and boarded up from the crown of the arch to the ground. What remains is a roadway, enabling one cart to pass at a time. I should say the length of the arch is something over 40 yards. There are two ordinary street gas-lamps to light this arch, and they throw a light down the archway. I cannot tell the exact position of the light at the other entrance. If I was standing at the Chamber-street entrance to the archway I should be able to see any one in the centre of the arch. I could see right through it; and I can do this at night. The centre part is not very light in the daytime. The archway is much used by carts and horses belonging to the Great Northern Railway Company. Their stables, which are about 30 yards away from the arch, are in Chamber-street. At a quarter-past 2 I came up Chamber-street from Leman-street. When about 80 yards away from the arch I looked at the clock on the top of the tower of the Co-operative Stores in Leman-street. It was then very near 2:15. I walked direct up Chamber-street to the arch. I turned down the arch with the intention of going as far as Royal Mint-street. While proceeding from Leman-street to the arch I did not see any one. When I turned into the passage I could see the woman lying under the arch on the roadway, about midway under the arch. I turned my lamp on as soon as I got there. I could not see it was a woman until I turned my lamp on. I noticed some blood. I saw her open and shut one eye. I blew my whistle three times. Constables 161 H and 275 H came to me in three or four minutes. They both came from Royal Mint-street; 161 H came first. I heard footsteps when I was going up Chamber-street and before I reached the arch. The sound was in the direction of Mansell-street, but I did not see any one. They sounded like a person walking at an ordinary rate.

How far were you from the arch then? -

As near as I can tell about 80 yards. I heard no one going through the arch in the direction of Royal Mint-street.

Can you say whether these footsteps had come out of the arch? - No, Sir.

Then they may have been going right down Chamber-street? -

I never heard them before. As soon as the constables arrived 161 H went for Dr. Oxley, in Dock-street, while 275 H went to Leman-street Police-station. Dr. Oxley then arrived and examined the body. Then other policemen arrived. I had not seen any one about that night except the railway men. They are going about all night, and through this arch. The horses that are engaged in shunting have to go backwards and forwards through it. Just before 2 a.m. I went from Chamber-street through the arch to Royal Mint-street and back again. Then I went up Mansell-street, Prescott-street, and back again. On the last occasion I did not see any one.

Were there any railway people near the spot at the time? -

No. Some men were working in the stables, and that was the nearest spot where there was any one about.

The Foreman. - How long did it take you to do your beat? -

Between 15 and 20 minutes. I passed through the railway arch each time I came up Chamber-street, and also through the other two arches.

Did any one, besides the constables, come after you blew your whistle? -

Some railway men arrived, with horses, after the officers were there.[4]

PC Thompson died on 1st December 1900 following an incident where he was attempting to break up an altercation at a coffee stall near the junction of Commercial Road and Adler Street. In the ensuing brawl, a 41 year-old cigar maker named Barnett Abrahams stabbed Thompson in the neck and he died from his wounds soon after.[5]

A relief fund for PC Thompson's widow and children was later set up by the local people of Stepney:

"Under the presidency of Mr. E. Mann, J.P. (the Mayor of Stepney), a meeting of the residents of the Borough was held on Wednesday morning in the Whitechapel Parish Church Room, for the purpose of taking steps to raise a fund for the relief of the widow and orphans of the late Police-constable Thompson. In an eloquent speech his Worship said the afflicted ones had a great claim upon the generosity of the public. By means of an appeal in the "Times" about £300 had already been raised, but he thought they ought to be able to obtain quite £1,000. Personally he was willing to help the movement in any way, and he would give 10 guineas to the fund. His firm would give another 5 guineas, and Mr. Thorp, their manager, 5 guineas. (Applause.) - A local committee was formed, and other necessary steps taken to raise the proposed fund."[6]