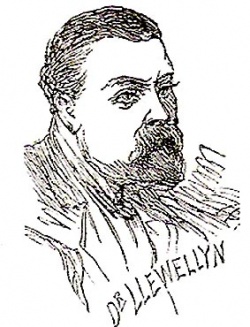 Born 1850 in Whitechapel. He appears to have never married and lived with his siblings[1].

He was summoned by PC John Thain 96J at approximately 4:00 a.m. on 31 August 1888 to attend Mary Ann Nichols, whose body had been found in Buck's Row. He conducted a brief examination, pronounced her dead, and had the body transported to the Old Montague Street Workhouse Infirmary Mortuary. He was later recalled to the mortuary when more extensive injuries to the abdomen were discovered by Inspector John Spratling. At 10:00 a.m. on Saturday, 1 September, Llewellyn conducted the post-mortem examination.

Dr Llewellyn’s testimony at the Nichols’ inquest (in which he is erroneously identified as Mr Henry Llewellyn) was reported in The Times:

“On reaching Buck’s-row he found deceased lying flat on her back on the pathway, her legs being extended. Deceased was quite dead, and she had severe injuries to her throat. Her hands and wrists were cold, but the lower extremities were quite warm. Witness examined her chest and felt the heart. It was dark at the time. He should say the deceased had not been dead more than half an hour. He was certain the injuries to the neck were not self-inflicted. There was very little blood around the neck, and there were no marks of any struggle or of blood, as though the body had been dragged. Witness gave the police directions to take the body to the mortuary, where he would make another examination. About an hour afterwards he was sent for by the inspector to see the other injuries he had discovered on the body. Witness went, and saw that the abdomen was cut very extensively. That morning he made a post-mortem examination of the body. It was that of a female of about 40 or 45 years. Five of the teeth were missing, and there was a slight laceration of the tongue. There was a bruise running along the lower part of the jaw on the right side of the face. That might have been caused by a blow from a fist or pressure from a thumb. There was a circular bruise on the left side of the face, which also might have been inflicted by the pressure of the fingers. On the left side of the neck, about 1 in. below the jaw, there was an incision of about 4 in. in length, and ran from a point immediately below the ear. On the same side, but an inch below, and commencing about 1 in. in front of it, was a circular incision, which terminated at a point about 3 in. below the right jaw. That incision completely severed all the tissues down to the vertebrae. The large vessels of the neck on both sides were severed. The incision was about 8 in. in length. The cuts must have been caused by a long-bladed knife, moderately sharp, and used with great violence. No blood was found on the breast, either of the body or clothes. There were no injuries about the body until just about the lower part of the abdomen. Two or three inches from the left side was a wound running in a jagged manner. The wound was a very deep one, and the tissues were cut through. There were several incisions running across the abdomen. There were also three or four similar cuts, running downwards, on the right side, all of which had been caused by a knife which had been used violently and downwards. The injuries were from left to right, and might have been done by a left-handed person. All the injuries had been caused by the same instrument.”[3]

The Times reported later that Dr Llewellyn had been recalled to the resumed inquest on the previous day and testified that “…since the last inquiry he had been to the mortuary and again examined the deceased. She had an old scar on the forehead. No part of the viscera was missing. He had nothing to add to his previous evidence.”[4]

He died in 1921 and is buried at Tower Hamlets Cemetery in Mile End.