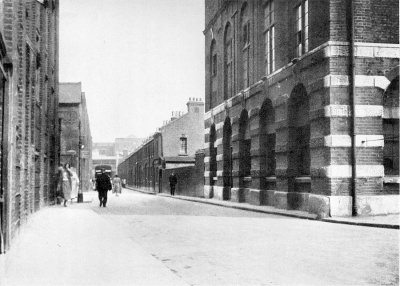 Narrow thoroughfare running east-west from Brady Street to Baker's Row (today's Vallance Road). Originally called Ducking Pond Row on account of a ducking pond being situated at the site of the Brady Street junction[1] . First map appearance as Buck's Row was c.1830.[2], however the name had been in use for many years previously[3].

By 1870, the street was lined on its north side by the large Browne & Eagle warehouses and on its south by a row of terraced cottages which terminated at a 'National School for Boys and Girls' (similar cottages stood in parallel Winthrop Street)[4]. The end of the terrace and the school were demolished c.1875 to make way for the East London Underground Railway and a new board school was constructed in 1876-7. The demolished houses on the terrace were replaced by a new structure, named New Cottage and Brown's Stable Yard. Essex Wharf was also built on the opposite side of the street around this time.Mary Ann Nichols' body was found in front of the gateway of Brown's Stable Yard. As a result of the notoriety brought upon the street by the murder, Buck's Row, including adjacent White's Row, was renamed and renumbered Durward Street on 25th October 1892. Brady Boys Club was also added to the north side next to Essex Wharf c.1896, but was replaced by a newer building c.1927.

Author Leonard Matters describes the street as it was in 1928:

"...Buck's Row can not have changed much in character since its name was altered. It is a narrow, cobbled, mean street, having on one side the same houses-possibly tenanted by the same people -- which stood there in 1888. They are shabby, dirty little houses of two stories, and only a three foot pavement separates them from the road, which is no more than twenty feet from wall to wall.

On the opposite sides are the high walls of warehouses which at night would shadow the dirty street in a far deeper gloom than its own character would in broad day light suggests. All Durward Street is not so drab and mean, for by some accident in the planning of the locality -- if ever it was planned -- quite two thirds of the thoroughfare is very wide and open.

The street lies east and west along the London and Northern Railway Line. It is approached from the west by Vallance Street, formerly Baker's Row. On the left are fine modern tall warehouses. I was interested to note that one of them belongs to Messrs. Kearly and Tongue, Ltd. in front of whose premises in Mitre Square another murder was committed on September 30th. On the left side of the street is a small wall guarding the railway line, which lies at a depth of some twenty feet below ground level. Two narrow bridge roads lead across the railway to Whitechapel Road. The first was called Thomas Street in 1888, but now is Fulbourne Street. The other is Court Street. By either of these two lanes, no more that two hundred fifty yards long, the busy main artery of the Whitechapel area can be reached from the relatively secluded Buck's Row. Going still further east, an abandoned London County Council School building breaks the wide and open Durward Street into narrow lanes or alleys. The left hand land retains the name of Durward Street 'late Buck's Row', and the other is Winthrop Street. Both are equally dirty and seemingly disreputable..."''[5]

New Cottage was badly damaged during the Second World War [6], and a garage was built in its place c.1966, also covering the site of the stable yard. The warehouses on the north side were demolished c.1970, followed by the terrace of cottages in January 1972[7]. The street remained derelict for many years before Essex Wharf and Brady Boys Club were demolished in 1990, heralding long-overdue redevelopment.

The north side is now the site of Swanlea School (1993-4) and Whitechapel Sports Centre. Kempton Court, a block of flats (1995) sit on the south side. The board school, the only building extant from 1888 was closed down in 1915[8] before becoming Elfin Works, but had fallen into disuse by the 1970s. After many years of being threatened with demolition following a fire in the mid-1980s, it was renovated as apartments in 1996 and is now called Trinity Hall.

Buck's Row/Durward Street is probably the most visually documented of all the murder sites. Notable photos include those by Leonard Matters in 1928, J Connor's widely used atmospheric shot c.1970, Winston Ramsey's capturing of the demolition of the terraced houses in 1972 and numerous high quality colour photographs of the derelict street taken 1986-90 by Robert Clack and others. Whilst in its predominantly derelict state (1972-94), Durward Street was also used as a location for scenes in a number of TV shows and films.