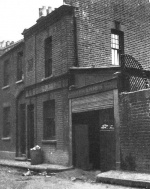 Murder site of Mary Ann Nichols with New Cottage to the left, 1938.

New Cottage was the last dwelling on the end of a long row of similar cottages on the south side of Buck's Row. It was so named as it was (in 1888) a comparatively recent addition, having been built in the 1870s following redevelopment resulting from the building of the East London Railway. It stood adjacent to Brown's stable yard and therefore practically overlooked the murder site of Mary Ann Nichols. Its appearance was slightly different to the existing cottages and had a decorative band at the front which can be seen on news illustrations of the time. Although originally unnumbered, the house was eventually designated as No.2 Durward Street.[1]

In 1881, the occupants are listed as Walter Purkiss, his wife, children and a servant. Purkiss would later reside at Essex Wharf opposite.[2]

In August 1888, it was home to Mrs Emma Green, a widow who lived there with her daughter and two sons, none of whom heard anything untoward on the morning of Nichols' murder. It was Mrs Green's son who washed away the blood from the paving stones.

New Cottage and the neighbouring house were damaged by wartime bombing (1939-45)[3] and later cleared, to be replaced by a garage c.1966; fortunately, it can be seen in contemporary illustrations and two photographs, taken in 1938.[4]