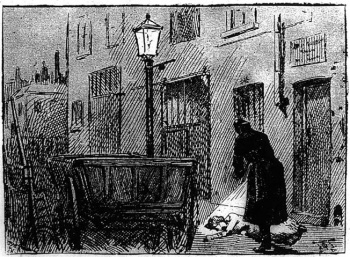 Discovery of the body of Alice McKenzie, Castle Alley, from the Penny Illustrated Paper, July 1889.

The Whitechapel Wash House (built 1846-51 in Goulston Street) backed onto Castle Alley, which at this time was extremely narrow and entered via a covered archway from Whitechapel High Street. Castle Alley was lined on its west side by warehouses and the Wash House and on its east side by smaller properties[6]. The confluence of the alley and Old Castle Street took the form of a sharp bend which was to be the site of the Old Castle Street Board School, built 1873. The narrowest part of the alley was also earmarked for widening in 1876 as part of the Cross Act (slum clearance scheme).

The body of Alice McKenzie was found on the west side of Castle Alley by Walter Andrews (PC) at 12.50am, 17th July 1889, lying near some market traders' carts, just to the south of the Wash House[7].

A press report gave an uncompromising account of the area where McKenzie's body was discovered:

"The scene of the murder is probably one of the lowest quarters in the whole of East London, and a spot more suitable for the terrible crime could hardly be found, on account of the evil reputation borne by this particular place, and the absence of any inhabitants in the immediate vicinity. Castle-alley, which is within a quarter of a mile of the scenes of the other murders, is principally composed of workshops, and is about 180 yards in length. The thoroughfare itself is blocked up, both day and night, with tradesmen's carts and wagons and costermongers' barrows, while on the opposite side to the workshops or store-houses is a high dead wall, above which, however, are the windows of some dwelling houses. This alley, which is entered by a passage, not more than a yard in width, between Nos. 124 and 125, Whitechapel-road, is entirely shut off from view of the main road, and would hardly be observed by the ordinary passer-by. At the end of the passage are the Board School and Whitechapel wash-houses, and the thoroughfare, from that end, leads into Newcastle and Wentworth-streets, both of which are principally occupied by foreign Jews and the frequenters of common lodging-houses. Although the houses in these two streets are densely populated, the people generally enter them from the Spitalfields end, especially at night time, on account of the dark and lonely nature of Castle-alley, as well as the evil reputation it has always borne among the respectable portion of the inhabitants. The vans and other vehicles which crowd the thoroughfare, notwithstanding the fact that the alley is lighted with three lamps, afford ample cover and secrecy for crime and violence. 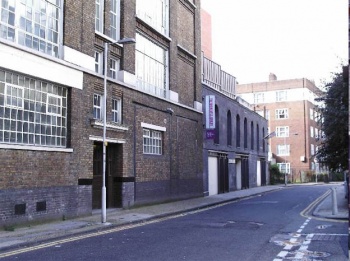 The exact spot where the body of the unfortunate woman was found was between two wagons, which were fastened together with a chain, outside the premises of Messrs. King and Sons, builders. Right against the wagons was a street lamp, and it was against this the body of the murdered woman was discovered by the police officer. The murderer, on account of the narrowness and intricacy of the surrounding thoroughfares, would have no difficulty in getting away unobserved; and if, as is believed, he is residing in one of the dozens of common lodging houses or small houses almost within a stone's throw of the spot where the deed was committed, he would have no trouble in concealing his identity after making his escape."[8]

There is no doubt that Castle Alley had a dubious reputation - a surveyor for Charles Booth's Map of London Poverty in 1898 described it thus:

"..under arch into Castle Alley. No houses, factories on either side, two of the Whitechapel Murders were committed at the south end. This street is quiet and used as a place of rest by the dwellers in the Whitechapel Lodging Houses. By custom, women sit on the west side of the pavement, men on the east."[9]

Soon after the murder (1890), properties on the east side at the junction with with Whitechapel High Street were demolished[10], although there were still concerns as to the narrowness of the entrance in the 1900s. It was properly widened c.1908[11].By 1916 it had been renamed as part of Old Castle Street[12]. By the 1930s, the Board School had been replaced by LCC flats (Herbert House) and a walkway had been constructed across the street as part of the Brooke Bond tea warehouses on the west side[13]. War damage on the eastern side led to the redevelopment of adjacent Newcastle Street and other small thoroughfares, resulting in the construction of the New Holland estate (Bradbury House, Ladbroke House and Denning Point) between 1965 and 1971[14]. Pommell Way now provides a direct link from Old Castle Street to Commercial Street.

The Wash Houses were redeveloped in 1998 and now form part of the London Metropolitan University's Women's Library (opened 2002).[15]