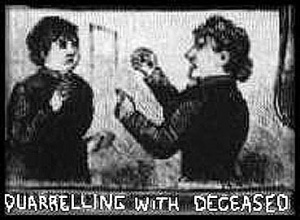 Resident of Crossingham's Lodging House for five months and may well have been a prostitute.

Had a quarrel with Annie Chapman over a piece of soap a week or so before her death. Cooper's possibly inaccurate version of events is as follows:

Witness knew the deceased, and had a quarrel with her on the Tuesday before she was murdered. On the previous Saturday deceased came in and asked the people there to give her a piece of soap. She was told to ask "Liza." Deceased then came to witness, who opened the locker and gave her a piece of soap. Deceased then handed the soap to Stanley, who went and washed himself. Deceased also went out, and when she came back witness asked her for the soap, which, however, she did not return, but said "I will see you by and by." Stanley gave deceased 2s., and she paid for the bed for two nights. Witness saw no more of deceased that night.

Witness was treated by Stanley. On the following Wednesday witness met deceased in the kitchen and asked her to return the piece of soap. Deceased threw a halfpenny on the table and said "Go and get a halfpennyworth of soap." They then began to quarrel, and afterwards went to the Ringers public-house, where the quarrel was continued. Deceased slapped her face and said "Think yourself lucky I did not do more." Witness believed she then struck deceased in the left eye and then on the chest. She could afterwards see that the blow had marked deceased's face.

That was the last time she saw deceased alive.[1]

John Evans stated that the quarrel ended in the kitchen at Crossingham's, rather than the Britannia.