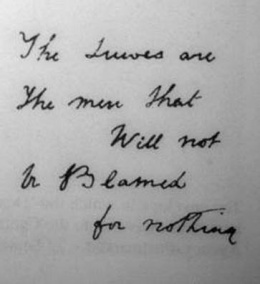 Transcription of the Goulston Street Graffito as held in Home Office files.

'Goulston Street Graffito' is the now commonly used term to describe the writing on the wall that was found above the blood-soaked portion of Catherine Eddowes' apron in the doorway of 108-119 Wentworth Dwellings, Goulston Street by PC Alfred Long at 2.55am, 30th September 1888.

A controversial issue from the moment it was discovered, the graffito continues to arouse debate and argument. It is therefore necessary to document the various sources relating to its discovery, wording, position and eventual erasure through contemporary reports and statements, allowing the reader to form their own conclusions (if any).

In his inquest testimony, PC Long stated that the writing was written in chalk on the wall above the apron piece. His wording was given as "The Juews are the men that will not be blamed for nothing". He copied the words from the wall into his pocket book. After calling a constable (PC 190H) from the adjoining beat, Long made a search of the staircases but found no trace of blood or persons. He proceeded to Commercial Street Police Station and reported the discovery of the apron and writing to the Inspector on duty who accompanied him back to Goulston Street. After inspecting the scene, they went to Leman Street Police Station where the Inspector handed over the portion of Eddowes' apron to Dr George Bagster Phillips.[1]

Although PC Long had said that the apron was not there on his previous visit (2.20am), he was unable to say whether the graffito had been there at that time. Neither could he form any opinion as to whether the writing was recent.[2]

The exact position of the writing is still uncertain. It is not clear as to whether it was on the left or right hand side of the doorway, or where it was positioned exactly in relation to the discarded piece of apron, save that it was 'above it'. According to DC Daniel Halse the writing was on 'the black facia of the wall' and appeared to have been written recently[3]. Sir Charles Warren stated that "the writing was on the jamb of the open archway or doorway visible to anybody in the street..."[4]. Donald Swanson described the writing as being "upon the wall of a common stairs", also claiming that it was blurred[5]. Superintendent Thomas Arnold's report (quoted below) suggests that the writing was at shoulder height.

"The Juews are the men that will not be blamed for nothing" - PC Long.

"The Juwes are not the men that will be blamed for nothing" - DC Halse.

(Although most authors now concur with the wording given by Long and Swanson, errors did transpire in early non-fiction Ripper books. For example, Donald McCormick gives it as "The Jewes are not the men to be blamed for nothing"[7] and Edwin T Woodhall has it that the message was written in a foreign language and nailed to a fence![8])

The removal of the writing was a contoversial action, in spite of the fact that Inspector James McWilliam (head of the City Police Detective Department) had given an immediate order for it to be photographed[9]. Superintendent Thomas Arnold, on viewing the writing, was desirous that it be erased, fearing anti-Jewish disturbances, to which Sir Charles Warren concurred. The City police requests to have only the contentious parts of the message removed prior to photographing were rejected by their Metropolitan Police counterparts - the final decision however, rested with the Metropolitan Police as Goulston Street was within its jurisdiction. The message was erased at 5.30am.

"I beg to report that on the morning of 30th Sept. last my attention was called to some writing on the wall of the entrance to some dwellings No.108 Goulston Street Whitechapel which consisted of the following words "The Juews are not [the word 'not' deleted] the men that will not be blamed for nothing", and knowing that in consequence of a suspicion having fallen upon a Jew named 'John Pizer' alias 'Leather Apron' having comitted a murder in Hanbury Street a short time previously a strong feeling ['ag' deleted] existed against the Jews generally and as the buildings upon which the writing was found was situated in the midst of a locality inhabited principally by that sect. I was apprehensive that if the writing were left it would be the means of causing a riot and therefore considered it desirable that it should be removed having in view the fact that it was in such a position that it would have been rubbed by the shoulders of persons passing in & out of the building. Had only a portion of the writing been removed the context would have remained. An Inspector was present by my directions with a sponge for the purpose of removing the writing when the Commissioner arrived on the scene"[10].

"A discussion took place whether the writing could be left covered up or otherwise or whether any portion of it could be left for an hour until it could be photographed; but after taking into consideration the excited state of the population in London generally at the time, the strong feeling which had been excited against the Jews, and the fact that in a short time there would be a large concourse of the people in the streets, and having before me the Report that if it was left there the house was likely to be wrecked (in which from my own observation I entirely concurred) I considered it desirable to obliterate the writing at once, having taken a copy of which I enclose a duplicate.

After having been to the scene of the murder, I went on to the City Police Office and informed the Chief Superintendant of the reason why the writing had been obliterated.

I may mention that so great was the feeling with regard to the Jews that on the 13th ulto. the Acting Chief Rabbi wrote to me on the subject of the spelling of the word "Jewes" on account of a newspaper asserting that this was Jewish spelling in the Yiddish dialect. He added "in the present state of excitement it is dangerous to the safety of the poor Jews in the East [End] to allow such an assertion to remain uncontradicted. My community keenly appreciates your humane and vigilant action during this critical time.

It may be realised therefore if the safety of the Jews in Whitechapel could be considered to be jeopardised 13 days after the murder by the question of the spelling of the word Jews, what might have happened to the Jews in that quarter had that writing been left intact.

I do not hesitate myself to say that if that writing had been left there would have have been an onslaught upon the Jews, property would have been wrecked, and lives would probably have been lost; and I was much gratified with the prompitude with which Superintendent Arnold was prepared to act in the matter if I had not been there."[11]

The decision to erase the writing did not sit well with the City Police and even Sir Robert Anderson said that the removal of such an important potential clue was an act of crass stupidity[12].

Walter Dew later remarked that the graffito was one of many pieces of writing in the East End that could have been blamed on the murderer, though he did not believe any of them were genuine[13]. It may also have been a piece of anti-semitic graffiti, of which there was much in the area at that time. Taken at face-value, the message does appear to be accusing or exonerating the Jews from something, the double meaning created by the use of the double-negative - are the Jews to be blamed for something or not? And if so, what?

Most notably, the spelling of the word 'Juwes' became an important element of the Royal Conspiracy Theory in the 1970s. Stephen Knight claimed that the 'Juwes' were Jubelo, Jubela and Jubelum, the assasins of Hiram Abiff, chief architect of Solomon's temple in Masonic lore[14].

Roslyn D'Onston Stephenson wrote to the City of London Police on 16th October 1888 saying that the word 'Juwes' may actuall say 'Juives', the French word for Jews (feminine)[15].

Author John Wilding pointed out that letters in the graffito can be rearranged to say "FG Abberline now hate MJ Druitt. He sent the woman to hell" as part of his theory implicating Druitt and J K Stephen in the murders[16].