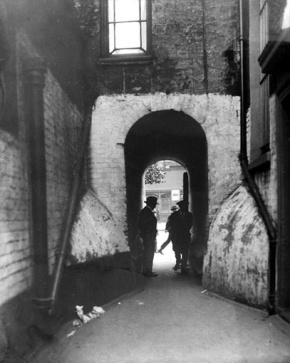 Extant from the late 18th century where it was laid out over former gardens south of Ducking Pond Row (later Buck's Row)[1] and consisted of two rows of dwellings on the east and west sides, accessible via a narrow covered passage from Whitechapel Road.

The dwellings themselves were demolished in the 1880s and the last evidence of them is included in the census of 1881. This is most certainly owing to new railways being added to nearby Whitechapel Station - in October 1884 the Metropolitan District Railway (now the District Line) was opened at Whitechapel, and Wood's Buildings merely became a railway bridge over the new lines, still giving acces to Winthrop Street.

At about 12.20am, 31st August 1888, Henry Tomkins and Charles Bretton, employees of nearby Harrison Barber & Co slaughterhouse, went for a stroll to Wood's Buildings, returning to work at 1.00am[2]. They were later to visit Buck's Row with fellow employee James Mumford to see the body of Mary Ann Nichols in situ.

It is often suggested that Wood's Buildings would have offered Nichols' killer an ideal escape route back onto the main thoroughfare, though of course this is conjecture.

As with many such obscure courts in the locale, they are open to misuse and the remaining alleyway of Wood's Buildings was often used by passers-by to relieve themselves, as well being the occasional haunt of prostitutes and drug-dealers. Nonetheless, it was a popular stopping point for guided tours as it offered a great deal of atmosphere. Crime historian Martin Fido can be seen taking a small group there in Sir Christopher Frayling's 1988 Timewatch documentary, 'Shadow of the Ripper'.

The passageway was closed off with metal gates at both ends in 2004 as a consequence of the previously mentioned criminal activities.

Timewatch - 'Shadow of the Ripper' (1988) available to view on VEOH