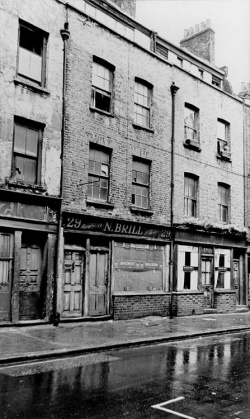 A single fronted, three-storey dwelling situated on the north side of the street, approximately half way between Commercial Street and Brick Lane. Believed to have been built c.1740 along with adjacent properties by carpenter Daniel Marsillat. There were two rooms on each floor and like many houses owned by weavers had an attic or garret, effectively creating a fourth storey. The floors were reached via a staircase on the left side of the property which itself was accessible from a passageway which led from the front of the house to the rear. The house was refronted in December 1849[1], possibly as part of converting the lower front room into a business premises. The house also retained its traditional shutters on the ground floor.

In 1888, No.29 consisted of eight rooms with a total of seventeen people living inside. The ground floor was occupied by Mrs. Harriet Hardiman and her 16 year old son. Both of them slept in the front room which doubled as a shop where they sold cat's meat. The rear room was used as a kitchen.

The first floor front room belonged to Mrs. Amelia Richardson and her 14 year old grandson. She had lived here for 15 years. Her business was making packing cases, employing her son, John, who did not live on the premises. She also rented the cellar, which was used in manufacturing, and the yard. The first floor back room was shared by a Mr. Waker, a maker of tennis boots, and his retarded adult son.

The second floor front room contained a family consisting of a carman named Thompson who worked at Goodson's in Brick Lane, his wife and adopted daughter. The back room was shared by two unmarried sisters named Copsey who worked in a cigar factory.

The third floor attic front room was occupied by an elderly man, John Davis (who was also a carman) and his wife and three sons. the attic rear belonged to Sarah Cox, an elderly woman whom Mrs. Richardson kept out of charity.[2] 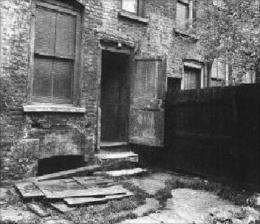 Annie Chapman's body was discovered a short time before 6.00am by John Davis - her body was lying parallel with the fence between Nos.27 and 29 her head close to the steps which led from the rear door into the yard.

Some time around 1895, the ground floor of No.29 was taken over by hairdresser Morris Modlin who traded there until 1905 after which it was then let to Nathaniel Brill. A new door was also fitted giving access to the front shop[3]. The hairdresser's ceased trading c.1957 and it is believed the ground floor was left unoccupied thereafter, although the 'N Brill' sign remained. The rest of the house continued to be occupied until 1969[4]. It was demolished along with the entire north side of the street in early March 1970 to make way for extensions to the Truman Brewery[5]. The site of Chapman's murder is now inside the car park which doubles as a sunday market.

29 Hanbury Street had been well-documented photographically, particularly in the 1960s as the threat of demolition loomed. As well as a number of images of the front of the premises which are currently in the Tower Hamlets History Archives, several shots of the backyard are also well-known. Other notable documentation includes pictures taken by John Gordon Whitby in September 1961 (including the only currently known colour photograph)[6], Robin Odell and Ray Luff c.1964, Stewart P Evans in 1967 and from the same year, the footage from the film The London Nobody Knows with James Mason.