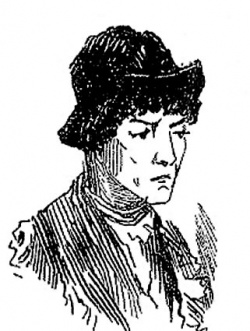 Born c.1857. Appeared at Thames Magistrate's Court in August 1887 and January 1888 on assault charges, the first possibly for the assault of the arresting officer (sentenced to one month's imprisonment), the second being for the assault of Eliza Smith (fine five shillings after two remands). It is from these court records that her age has been estimated.[1]

Described as a widow and 'unfortunate' living at 5 Miller's Court, Cox gave a statement on the 9th November 1888. She had known Mary Kelly for eight months (i.e. since Kelly had moved into Miller's Court), knowing her by the name Mary Jane. At about 11.45pm on 8th November 1888, she walked into Dorset Street from Commercial Street and saw Kelly walking in front of her with a man. They turned into Miller's Court and went inside No.13, at which point Mary Ann bid Kelly goodnight.

Mary Kelly was apparently very drunk and could barely answer, but managed to say goodnight in return. Shortly afterwards, she was heard singing in her room. Cox went out shortly after midnight and returned about 1.00am by which time Kelly was still singing. Cox went out again just after 1.00am and returned at 3.00am and by this time all was quiet in the court and there was no light on in No.13. She stated that after that, she heard no noise for the rest of the night.

The man she saw was described as about 36 years old, 5ft 5ins tall with a fresh complexion and blotches on his face. He had small side-whiskers, a thick, carroty moustache and dressed in shabby dark clothes, dark overcoat and a black felt hat. He was holding a quart can of beer.

She described Kelly as wearing a linsey frock, red knitted crossover around the shoulders, but no hat or bonnet.[2]

The inquest testimony of Mary Ann Cox, taken on 12th November, added several details not in her original statement. For comparison, her questioning at the inquest is reproduced here in full, as it appeared in the press:

Mary Ann Cox stated: I live at No. 5 Room, Miller's-court. It is the last house on the left-hand side of the court. I am a widow, and get my living on the streets. I have known the deceased for eight or nine months as the occupant of No. 13 Room. She was called Mary Jane. I last saw her alive on Thursday night, at a quarter to twelve, very much intoxicated. [Coroner] Where was this ? - In Dorset-street. She went up the court, a few steps in front of me.

[Coroner] Was anybody with her ? - A short, stout man, shabbily dressed. He had on a longish coat, very shabby, and carried a pot of ale in his hand.

[Coroner] What was the colour of the coat ? - A dark coat.

[Coroner] What hat had he ? - A round hard billycock.

[Coroner] Long or short hair ? - I did not notice. He had a blotchy face, and full carrotty moustache.

[Coroner] The chin was shaven ? - Yes. A lamp faced the door.

[Coroner] Did you see them go into her room ? - Yes; I said "Good night, Mary," and she turned round and banged the door.

[Coroner] Had he anything in his hands but the can ? - No.

[Coroner] Did she say anything ? - She said "Good night, I am going to have a song." As I went in she sang "A violet I plucked from my mother's grave when a boy." I remained a quarter of an hour in my room and went out. Deceased was still singing at one o'clock when I returned. I remained in the room for a minute to warm my hands as it was raining, and went out again. She was singing still, and I returned to my room at three o'clock. The light was then out and there was no noise.

[Coroner] Did you go to sleep ? - No; I was upset. I did not undress at all. I did not sleep at all. I must have heard what went on in the court. I heard no noise or cry of "Murder," but men went out to work in the market.

[Coroner] How many men live in the court who work in Spitalfields Market ? - One. At a quarter- past six I heard a man go down the court. That was too late for the market.

[Coroner] Did you hear the door bang after him ? - No.

[Coroner] Then he must have walked up the court and back again? - Yes.

[Coroner] What would you take the stout man's age to be ? - Six-and-thirty.

[Coroner] Did you notice the colour of his trousers ? - All his clothes were dark.

[Coroner] Did his boots sound as if the heels were heavy ? - There was no sound as he went up the court.

[Coroner] Then you think that his boots were down at heels ? - He made no noise.

[Coroner] What clothes had Mary Jane on ? - She had no hat; a red pelerine and a shabby skirt.

[Coroner] You say she was drunk ? - I did not notice she was drunk until she said good night. The man closed the door. By the Jury: There was a light in the window, but I saw nothing, as the blinds were down. I should know the man again, if I saw him.

By the Coroner: I feel certain if there had been the cry of "Murder" in the place I should have heard it; there was not the least noise. I have often seen the woman the worse for drink.[3]

Author Daniel Farson was able to interview Mary Ann Cox's niece about that evening, however, her claims appear somewhat 'embroidered':

"The night of the murder of Mary Kelly my aunt was very young, just married with one child. She was standing at her door and waiting for her husband who was a bit of a boozer. She saw Mary coming through the iron gate with this gentleman, a real toff. Mary was always bringing home men, mostly seamen from a pub called the Frying Pan, singing and holding their arms with a bottle of gin under her arm. This night as they got under the lamp in the court they stopped. Mary's words were "all right love don't pull me along". My aunt said they were only a few yards away from her, at the door she said she saw him as plain as looking at her hand. He was a fine looking man, wore an overcoat with a cape, high hat, not a silk one, and a Gladstone bag. As they went into the house, Mary called out "goodnight" to my aunt."

She also added that her aunt heard 'terrible screams from Mary, but no one took any notice because it happened often'. Finally, she is quoted as saying this about the discovery of Kelly's body:

"Now next morning a Mrs Storey who was always in and out of Mary's room to have a pinch of snuff and a chat, was the first person to find the terrible body. Mary had a string on the door so anybody visiting had no need to knock. She dashed next door to my aunt and they both went in. My aunt never forgot the sight she saw."[4]

A classic example of 'gilding the lily' to the point of creating utter fiction!