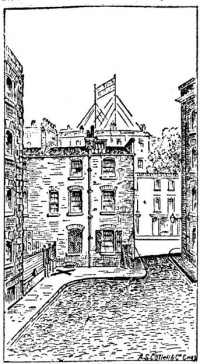 Originally the site of the Holy Trinity Priory which was founded by Queen Matilda (wife of Henry I) in 1108. The priory was dissolved in 1538 and the land and buildings sold. Today's Mitre Square roughly corresponds with the position of the cloisters.

The square became known as Duke's Place by 1676[1]and was also the site of St. James' church. South of this was the Mitre Tavern and Mitre Court (later Mitre Street) and to the north, a narrow passage known as 'Dark Entry' (later Church Passage). The earliest appearence of the name Mitre Square seems to be in 1830[2] . St James's church was demolished in 1874.

In 1888, Mitre Square was predominantly lined with 4 large warehouses (one of which held offices), a yard, a commercial building and a few old houses (some of which were unoccupied). Access to Mitre Square was by a broad, lit opening from Mitre Street. As you entered the square from the street, upon your right would have been the Picture Frame making shop belonging to Mr Charles Taylor. The front of this shop was actually facing Mitre Street. Turning right you would obviously arrive at the rear of Mr Taylor's shop. Walking on you would pass the rear of three empty buildings. The first was the back of what was formerly coffee rooms, the other two were abandoned dwellings. Now facing you would have been the yard belonging to Heydemann & Co. This partially covered yard held building supplies and was bordered on the square side by a wooden fence, supported on a small 2 1/2 foot wall. These buildings and yard formed the darkest corner of the square, and it was in this spot that PC Edward Watkins found Catherine Eddowes' body.

Turning left, with Heydemann & Co's yard now on your right, the next building you would come to was that of Horner & Co, Chemical Goods Sundriesmen.[3] This was a large warehouse and one of the four warehouses in Mitre Square. Facing you now would have been Church Passage, which tapered from 18 feet wide at its entrance in Mitre Square, to 5 feet wide within only a distance of a couple of paces. This passage lead to Duke Street. It was at the passage's Duke Street entrance that Joseph Lawende, Joseph Hyam Levy and Harry Harris saw a couple most feel was Eddowes and her killer. Above its entrance to Mitre Square hung a wall mounted Gas lamp. This formed the second corner of the Square. Another left turn meant that now upon your right was the Kearley & Tonge warehouse and counting house, [4] a mixture of storage and office space. This building was huge and dominated Mitre Square. It was upon this building that the Church Passage lamp was affixed to. The first door that you would have passed, situated very near to Church Passage, would have been locked for the night. The second door, about half way along, was unlocked. Working just behind this door was George Morris, Kearley & Tonge's Nightwatchman. It was at this spot that PC Watkins summoned Morris for help. Moving further along would have been a small locked entrance that lead to the yard of builders Philips & Bisiker.[5] 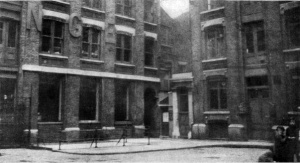 Facing you now would have been the 2nd passage out of Mitre Square. St James Passage (today called Mitre Passage) was a covered passage and had, at its entrance to Mitre Square, two bollards (undoubtedly made of cast iron). This passage led to St James Place, known colloquially as ‘Orange Market’, due to the fruit stalls that retailers set up there. At the St James Place entrance, hanging from its roof, was another wall fixed gas lamp. Back in Mitre Square, St James Passage was situated in the 3rd of the Squares 4 corners. Next to St James Passage entrance stood the second building Kearley & Tonge [6] had in the square. This was solely a warehouse and at its front was situated a yard bordered by a small, metallic fence which George Morris had kept secure. Opposite this building, located on the pavement, stood the only freestanding gas lamp in Mitre Square. This lamp was reported to be deficient on the night of Eddowes murder; that is to say that either there was something wrong with the lamp's workings or the gas supplied to it was of poor quality.

Walking around, between the fence and the gas lamp would have led you to No 4 Mitre Square. This building was one of four similar houses built in the early part of the century, when Mitre Square could still boast a church. In 1888, it was empty and dilapidated. Next door stood No 3, the home of PC Richard Pearce and family. The City PC was off-duty when his colleagues Edward Watkins and James Harvey started their beats. Adjoinging PC Pearce's home, and forming the fourth corner of Mitre Square, was the final warehouse belonging to Williams & Co. Turning left for a few paces, then right, takes you back to the Mitre Street entance of the Square, and situates you underneath the gas lamp fixed to the wall of Williams & Co. This lamp really benefited more the street than the square. 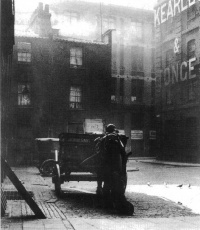 Mitre Square today is defined by Mitre Street, Creechurch Lane, Duke's Place and Aldgate. The Sir John Cass School and premises back onto the square around the point where Horner & Co and Heydemann & Co yard used to be. Both Kearly & Tonge buildings have gone, replaced today by offices and a small car park. Church Passage remains though it has been renamed St James's Passage. It is far wider that in 1888 however - if you wander towards the Sir John Cass side of the passage you will note the 1888 'footprint' remains in the paving stone, a reminder of how narrow that passage really was. St James Passage is still located in the same spot under a different name (Mitre Passage) and it is still covered.

The area where Eddowes' body was found has altered a lot. Gone are the empty houses and Mr Taylors shop. These have been replaced by benches and flower beds (built 1986). The pavement around Mitre Square is very similar to the pavement of 1888. However the most redeeming feature is the fact that Mitre Square remains 'cobbled'. The setts of 1888 ran in a different line to those of today. Obviously the Square has been re-cobbled, however it is possible that the ones that used to lay there in 1888 where the same as todays, just laid differently.

The actual position of Eddowes body is not on the pavement as most who visit the area assume; it is in fact a few feet toward the gated back entrance of the School, just upon the spot where kerb and cobbles meet. 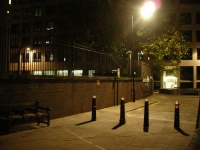 Mitre Square, November 2008 (photograph by Andrew Firth).
Mitre Square has undergone total rebuilding since 1888, with the majority of the demolition taking place as late as 1979/80. Many photographs exist of the square before redevelopment, taken by Leonard Matters and William Stewart, as well as an atmospheric shot by William Whiffin (1925) and numerous examples by John Gordon Whitby (1961), Robin Odell (1964) and others. Mitre Square, due to its accessibility, is a focal point for Ripper guided tours and will often have several groups there at once.